I almost forgot to mention something certainly worthy of note. Ethan has a highly unusual skin condition right now called Lichen Striatus. It is a rash of little pink bumps which goes up and down his entire leg. It appears for no reason, causes no discomfort, and goes away by itself in a period of months. When the doctor saw it, he called in another doctor and they were like two kids in a "highly unusual condition" candy store. You have to check it out if you see him in the near future, or I guess you might find some pictures online somewhere. So anyway, wierd.
Posted by Hailey at 10:44 AM No comments:

Yesterday was my birthday. It was a really great day, and I was overwhelmed by the amount of phone calls, e-mails, cards, and gifts I received. I felt pretty special. All of this attention might have even gone to my head a little, if it were not for the efforts of one small person. Said person called me out of bed at 5:45 in the morning to re-attach his band-aid. An hour later, he demanded breakfast and company on the couch. When I was on the phone with my dad, he yelled at me and when I ignored him, he stormed into the garage and slammed the door. He went over to a friend's house, and when I tried to take him home he ran away and when I caught him, I had to carry home a kicking, scratching, 31-pound ball of fury. In the evening, he left a present out of his diaper on the living room floor. Thankfully, my brother-in-law cleaned it up before we got home, but still... In other words, my little guy keeps it real. He keeps my feet chained fast to the ground, even when my head is up in the clouds. He reminded me yesterday that I am just a normal human being, prone to all sorts of weaknesses and foibles. My daughter kept it real on Mother's Day when she presented me with a card that said, "My mother is: 28 years old and weighs: 399 pounds. She is really smart. She knows a lot about: babies."

Seriously. Where would I be without my kids? I know exactly where I'd be, and who with, that's the thing. Ben and I went to Dallas last year for his best friend's wedding. It was our first trip by ourselves since our kids had been born, and it was an eye-opening experience. We slept in until 9:30, we spent a ridiculous amount of time getting ourselves ready, we were on time to everything, we ate out for every meal, we stayed up late with friends and went to clubs. We were utterly self-absorbed. We even got pedicures together and Ben got his feet waxed. I believe it was at that point that I realized that while I could really get used to this lifestyle, I'm not sure I would really like the selfish people we would inevitably become. Don't get me wrong. I am all about pampering yourself once in a while. I think I deserve it. But I realized then that my kids, for the most part, force me to be selfless. I can't think about myself all the time. There are times when I can't even think my own thoughts, period! They keep me humble and keep me focused on others and force me to never take life too seriously, and for that, I can only hope I will be a better person. And so my friends, here's to keeping it real! (And now I've got to run, as a certain person is screaming for milk in his green cup.)
Posted by Hailey at 8:11 AM 5 comments:

The Thrillionaires take on the BYU

I got to perform for 6,000 screaming women last night with three of the most awesome performers I know. And they laughed at us! Of course, they were all charitable Mormon ladies, away from their husbands and kids, so I'm pretty sure they'd laugh even if we weren't funny, but who cares? We also got to meet some amazingly talented LDS musicians who also happened to be way friendly and cool. I'd have to say it was a pretty fun gig. Oh yeah, and two girls told me I looked like Reese, so that brings the total number of times I've been told that up to about twelve. Wierd. 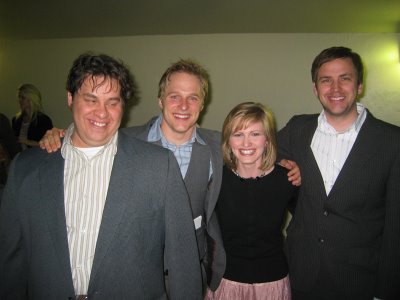 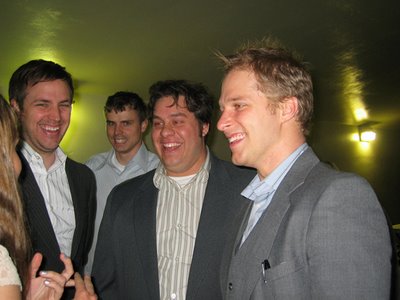 Greeting the fans (Ben in the background)
Posted by Hailey at 2:45 PM 3 comments:

People tell me I look really young all the time. I turn thirty next year and I can't wait because I know that the response of "I'm thirty!" has such a better kick to it then any number in the twenties, especially because they usually guess twenty-one.

Most strangers are very polite when they mistake my age and the whole thing ends up being a very complimentary experience. However, some people take it a little bit too far. Case in point, the other night I was in a Disneyland line at Cafe Rio with my good friends Jenny and Laura. We were, in fact, talking about the happiest place on earth when the elderly bald man in front of me (I say elderly as to retroactively prejudge him as he did me) turned to me and asked,

"We (indicating the woman next to him) have just been wondering, is that a real wedding ring you're wearing? Are you really married? Because you look like you're twelve."

Whoa. So many questions. Which one to answer first? All I got out was a non-descript "I am," before he added to my friends,

Was this guy for real? I informed him that I was married, had two children, and would be twenty-nine next month. He said, "I'm twenty-nine, and I look forty."

That was a freebie. At least I didn't have to point that out for him. I did throw in a "Well, thank you...I guess..." and that was the end of that awkward conversation, or so I thought.

"Can I ask where you're from? I need to drink some of the water from wherever that is."

Uh, too late. And now sort of creepy. Does he always solicit girls whom he believes to be not yet of a legal age while he's on a date with his wife?

I just told him that my mom looks young and he said his mom looks old (tomato, tomahto) and I said that it would probably work to my advantage when I was forty and he said, "I guess..." and then I ended the conversation with the good old "Must be the genes," and a shrug of the shoulders.

My friends and I had a laugh over this guy's wierd interrogation, but the more I thought about it, the more strange it seemed to me.

First of all, the guy almost seemed offended that I looked young. My friends thought he must be jealous. And my mom did always say that other kids cut you down when they are envious of you. So is that why he said I was twelve? Because when you think about it, it's one thing to assume someone is nineteen or sixteen--that's not really insulting. But to tell a woman she looks entirely pre-pubescent? Nice manners, guy! Is this what this couple does for kicks? Goes out in public to prey on innocent, unsuspecting Disneyland-loving girls wearing wedding rings? And why throw in the part about "is that a real ring?" I may as well have been five, out in public in my mom's heels, dress, and jewelry, trying so hard to be a grown-up.

I think my problem is that I'm too nice. I need to do the other adolescent-looking women a favor out there and nip these guys in the bud. What I should have said was, "Yes, I am married, and yes, I am twelve. I'm going to be wife number six, June here is number five, and Mary Beth, number three. They are taking me out to dinner to celebrate my engagement!" I would have paid money to see his reaction, and I can only hope he would have learned his lesson.

Which reminds me, whenever I fly with my kids by myself I get the strangest looks, all of which seem to say, "Oh look at that poor girl who got knocked up once in high school, then was stupid enough to do it again!" I have always longed to turn to one of these onlookers and casually mention, "I hope this flight is on-time. I have to get back for the prom tonight!" Maybe next time, I just might.
Posted by Hailey at 12:15 PM 5 comments: