So, I'm currently reading this book called The Happiness Project, by Gretchen Rubin. It's written by this NYC resident who decided to spend a whole year working on different elements of her life, month by month, to create more overall happiness. It's really sort of an ironic read for me at this exact juncture in my life, but that's another topic for another day.

I bought the book from my ibooks app on my new iphone and I love it because now I can read on the subway instead of doing what I usually do, which is try not to stare at people who are trying not to stare at me. It's a fun game, but one I tire of quickly. So now I can stare at my iphone and pretend like the rest of the world doesn't exist, and this makes me a true New Yorker.

But, back to the book. I must say, I'm enjoying it and find myself thinking about it a lot. One thing I really like that she writes about is how she came up with twelve commandments for herself. The first one is "Be Gretchen," meaning it's important to be true to yourself and what makes YOU happy as much as possible. You need to come to grips with what you think is fun and interesting, and not feel like you should love something just because everyone else seems to.

I have probably mentioned this before, but I feel like I spent a great deal of my 20's worrying about what were the best ways to be a mom, dress, act, and play based on what I thought others were doing. For example, everyone was obsessed with scrap-booking, so I went and bought some scrap-booking supplies because that's what good moms did. I never wanted to touch those supplies and so I wondered what was wrong with me.

Around the time I hit 30, I had some real AHA! moments. I realized that I have no desire to scrapbook, and that's OK. I don't have to scrapbook to be a good mom, I don't have to like Coach purses to be stylish, and I don't have to watch SNL and Judd Apatow films to be funny. Once I had these revelations, I realized that it gave me more freedom to try different things that I might not have tried before, once I got rid of the pressure all around me to be good at them. Like running. I'm just not going to run a marathon. I know that. And so when all the ladies in my ward are discussing their training programs, I can smile and not feel uncomfortable because I know I can run 3 miles, and that's pretty awesome for me. "Being Hailey" gives me the freedom to be obsessed with Sci-Fi and post-apocalyptic scenarios, be sort of a food snob, watch a lot of TV, and get my biggest rush from the laughter of an audience. Being myself means I wear my Target threads with pride and never worry about stepping outside donning a cloche hat. It means I might not have anything to say when people start debating politics, but I will be the first to jump into an intense conversation about Gale vs. Peeta, or who should be cast as Katniss.

I've always told my kids, "Everyone has different talents," and I truly believe that there's a reason for that. Even though I don't sew, Rachel does, and so she makes me skirts and pillows. Even though I hate organizing projects, Lisa doesn't, and so she writes me amazing lists. Kacy knows the best books to read and how to make awesome play-lists. I'm not always sure what I contribute to others, but I think I'm fun to drink a Diet Coke and watch SYTYCD with, and maybe that is sort of a talent, right? I guess I've just learned the value in pursuing your own interests and passions, and letting others pursue theirs. And we are all that much more enriched for it.

Now, go and watch Downton Abbey on Masterpiece Theater (if that's your thing) so we can talk about how awesome Maggie Smith is as the Dowager Countess, a lady who is the very definition of being comfortable in your own skin, even if that skin is extremely judgmental and outspoken.
Posted by Hailey at 2:29 PM 19 comments:

New York has some awesome food, but it doesn't have a corner on the food market. For example, I haven't found a burger place that stands a chance against Smashburger nor a pad thai or massaman that I like better than Bangkok Grill, but I'm starting to wonder if I am only obsessed with the latter because it has been such an integral part of my life for the last three years. However, I have promised friends that I would keep track of my favorite dishes and places for their visits, and so, in no particular order, the LIST so far:

P.J. Clarke's: Ben took me to this place when we were here to apartment hunt this past summer. I geeked out over it because Don and Sterling went there for a drink once! It is very old school New York, and sitting in it, I can easily imagine a smoke-filled room of fedoras and pill box hats. We ordered the baked macaroni and cheese with bacon and I have never regretted it! (Sidenote: the owner of P.J. Clarke's died in the restaurant. He had his whole family there, and he was screaming at a waiter, and he just keeled over, dead. Moral of the story: be nice to waiters.) 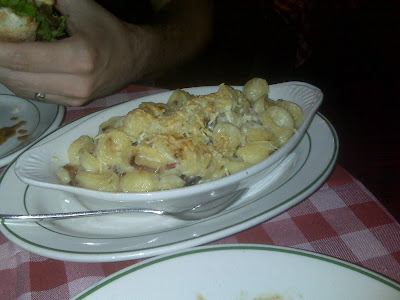 Island Burgers and Shakes: Now, I said that I have not found a burger place to rival SB and that is because there are not many fast and fresh burgers here, a la SB and Inn-N-Out. They do have 5 Guys, which is alright, but not my favorite. They also have Shake Shack, and I have to say, I was underwhelmed. Now I love a medium rare patty, but my Shake Shack burger was bloody raw. And the shake is just your regular Inn-N-Out style straw shake. So yeah. Whatever. Anyway, there are lots of restaurant burgers that are good. We took my friend, Daryn, to Island Burgers before he went to see a show. It is in Hell's Kitchen and also across the street from Ben's building. I don't even remember which burger I ordered, but I really liked it and it was so big I had to eat it with a fork. I would go here again for sure, especially since I need to try a shake next time! 5 Napkin Burger is also quite good. Ben got a burger and I got mac and cheese, and both were excellent.

La Nougatine at Jean Georges: This restaurant is fancy-schmancy. We took Ben's mom here for her birthday. It is located in the Trump Tower on Columbus Circle and has a dress code. However, it also has a prix fixe dinner menu. In fact, Jean Georges was one of the first chefs to introduce a prix fixe menu when the economy got bad. I think it's a brilliant move because non-rich folks like us can eat at a glorious French restaurant. (Sidenote: Jean Georges is also the inventor of the molten chocolate cake. It was the result of a baking accident and now everyone makes it! I had his for dessert and it was divine!) Just order the fixed price menu. It will all be amazing. Ben's mom also ordered some butternut squash soup that made me cry.

Lombardi's: This pizzeria is in Little Italy and is apparently the first pizzeria in America. Cool, right? We went here with Ben's mom when she was in town. We did have at least a 30 minute wait, but it was a Saturday. It was pretty awesome. Since eating there, I have been to some other famous pizza places that beat this one out (see: Keste) but still good pizza. 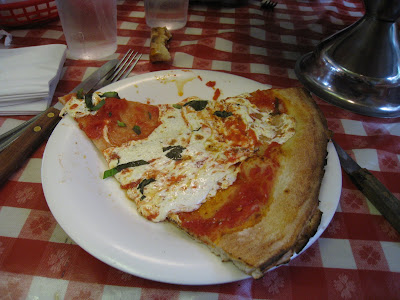 Alice's Tea Cup: My mom was in town and we wanted to go to lunch for the twins' birthday, so we decided to try this cute little tea and scones cafe. My sister-in-law Kristen had told me about it and I had seen online that they had brunch. The girls love breakfast more than anything so I thought it would be perfect. Unfortunately, I missed the part that said brunch is only served on the weekends and we showed up on Monday. I was underwhelmed with the kids' menu selections, but I ordered the BLT on black bread for myself and wow, I love that thing. It had a blue cheese spread on it that was amazing, and my mom tried to eat all of mine. The restaurant was adorable and I would like to go back and try one of the various herbal teas and scones, along with my sandwich, of course.

Gennaro: This cozy little Italian place is right across the street from our apartment and Ben had read really good things about it, so we popped over there one night. The only thing I can really remember is this: the warm potato tartine with portobello and goat cheese. Oh.My.Word. I am so in love with this thing. Comfort food extraordinaire. Please go and try it. And take me with you.

Keste: Ben had a slow week at work. Ben decided to go on a quest for the best pizza in New York. He did all his research and went to different places for lunch, and all without me. He said he wanted to try them all out before bringing me. How thoughtful of him. Anyway, he made good on his promise, and brought me to Keste two days after Christmas. They are a true Neapolitan pizza joint, with real volcanic rock from Italy in their brick oven. I ordered the pizza special because the waiter told me it would change my life, in the most awesome Italian accent, I might add. It sort of did. It had more blobs of mozzarella on it than I thought was possible. Ben and I each ordered a whole pizza. The couple next to us said, "How are you guys going to eat all that?" We didn't leave a crumb. Then the same couple said, "You guys are awesome!" and left. Taken out of context, that comment is really strange. I like to think that the couple on the other side of us (who were from LA and on a pizza tour, wouldn't you know it) heard that statement and wondered why we were so awesome, since they had arrived there after the initial reaction to us ordering two pizzas. Either way, I felt awesome. 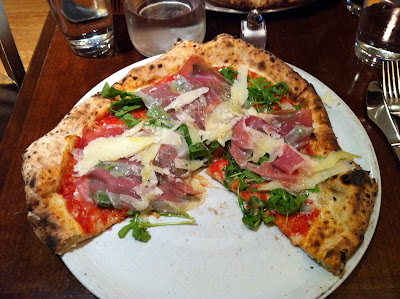 Crumbs Bake Shop: Many cupcakes I've had here have made me want to cry from disappointment. I have had too many dry Magnolia cupcakes to count. However, I discovered a cupcake at Crumbs that is essentially a giant Hostess cupcake. It is chocolate with white butter cream filling and chocolate ganache frosting on top. So far, it has always been moist and amazing. I am hopelessly in love. 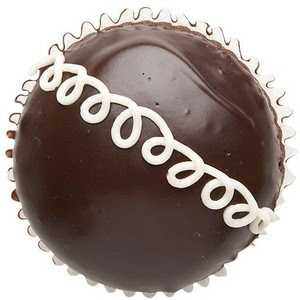