I know that the holidays are over, believe me, especially as I'm freezing my tail off in this never-ending January (almost February) weather. However, I'd like to bask in the warmth of the holidays long past for just a moment.

We kicked off December with a raging party for the twins on the 2nd.

The girls, when presented with their cakes, reacted in opposite ways. 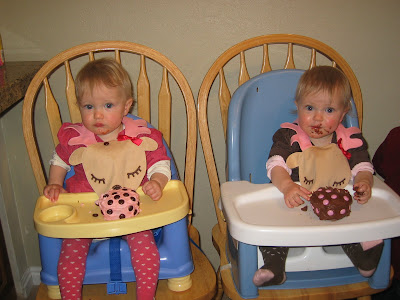 Laney demolished the thing in twenty seconds, shoving fistfuls of chocolate in her mouth... 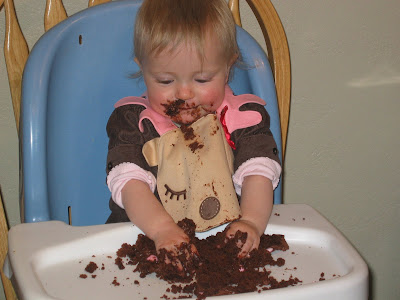 ...while Lucy, the Felix to Lane's Oscar, sat there and stared in disgust at the pink frosting that had somehow attached itself to her finger. 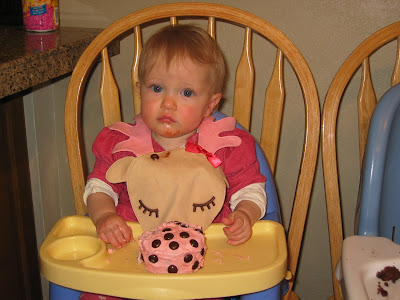 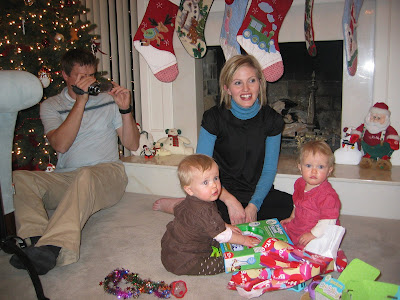 My mom and Aydan arrived at the tail-end of the party, and stayed with us for a week.

We went with Grandpa and Grandma Cannon and Aunt Margy and Uncle Eldon to see the lights at Temple Square. 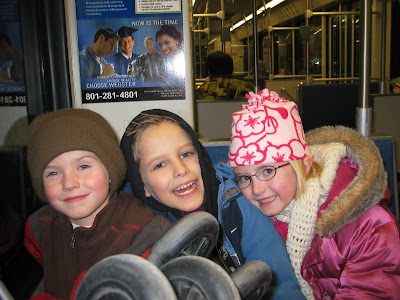 Lucy and Lane, looking cozy, with the other kids at Temple Square 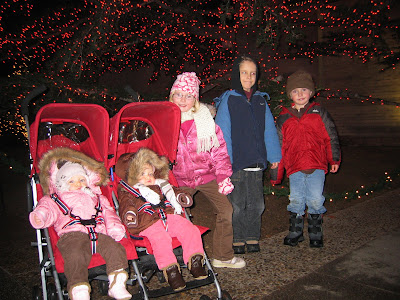 Mom, Lucy, Grandma, Lane and Aydan waiting for the train 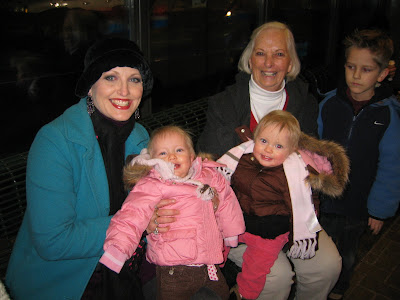 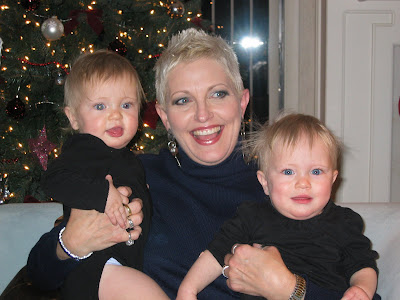 We made a stop at Build-a-Bear to pick up a Rudolph and Clarice with Travis and Rachel and Co. (It was mainly the moms who wanted the reindeer, let's be honest)

Mila, waiting to get her Clarice stuffed. Look at festive Rachel in the background... 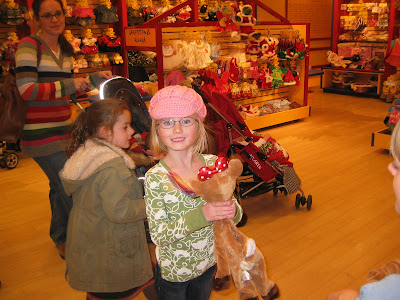 Mila, Andrew, Ethan and Emma with the finished products! 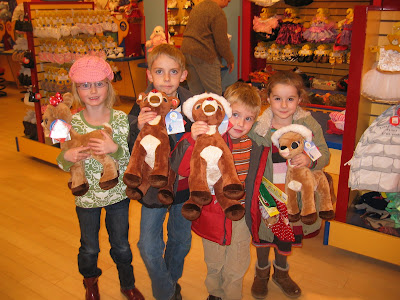 We got to see Mila's Christmas play. She played Friendly the Elf and Rachel made her a killer elf ensemble. 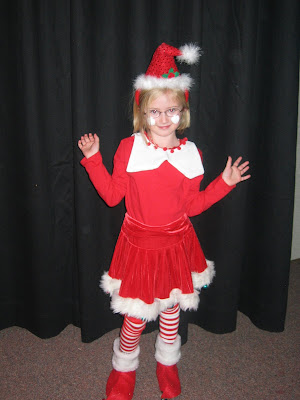 Why yes, those are bells around the edge of her skirt! She jingled all over the stage! 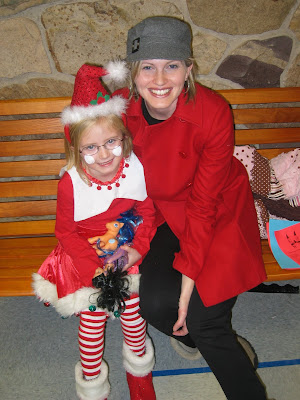 After Ben got done with Finals, we headed to Scottsdale, Arizona, where we spent Christmas in condos with Ben's entire family. It was wild and crazy and some people were throwing up and others were playing Guitar Hero III all night long--basically our typical family gathering. Here are some highlights:

That would be SEVEN one year olds. Count them if you don't believe me! We were all pregnant together. The couch really clashes with them and it bugs me, but whatev 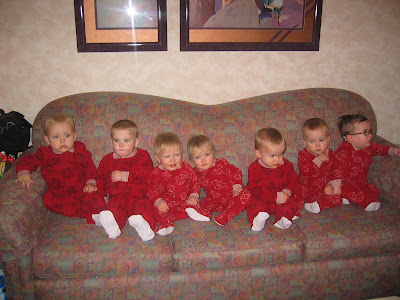 All the grandkids, looking content on this peaceful Christmas Eve 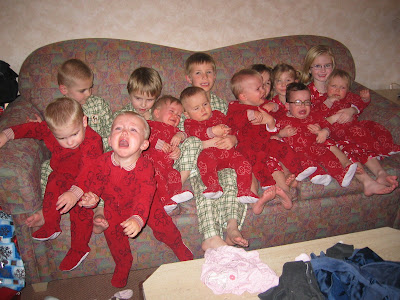 The boys--can you guess which one is the dad? Barely! 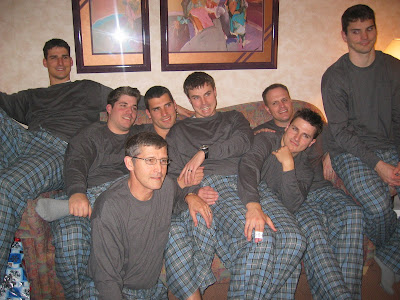 The ladies--no one pregnant in this picture! (At least, I think so...) 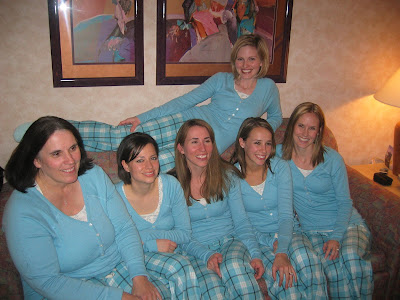 Mila and her American Girl doll--don't you think they look alike? 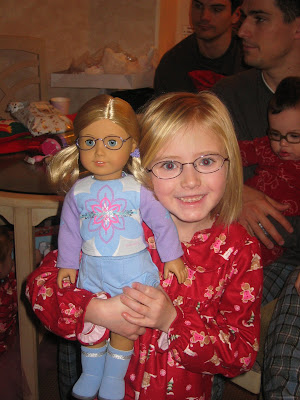 Melanie and I took nine kids to the train park by ourselves--what were we thinking? 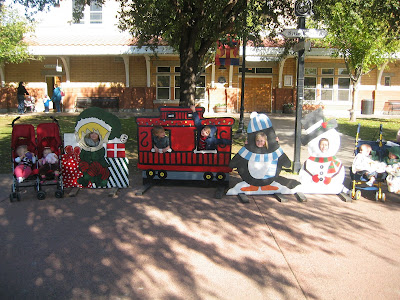 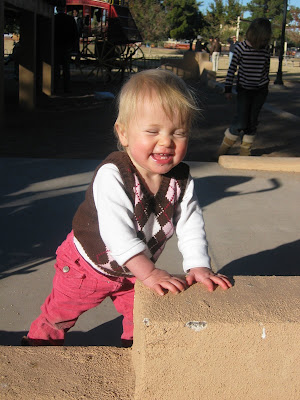 Lucy, with a sticker on her face 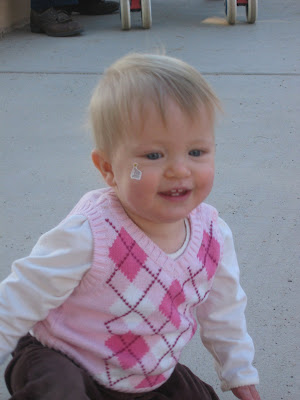 Ladies' day out was spent getting massages, pedicures, and a fantastic lunch at the Cheesecake Factory! 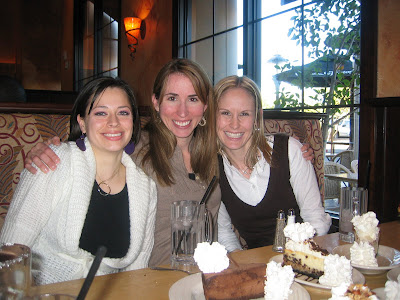 I look tired in this picture. Maybe because I was. Sleeping in the same room with five people who wake you up all night does not a good night's sleep make. Especially after you've stayed up half the night talking about hemorrhoids--I love this family. 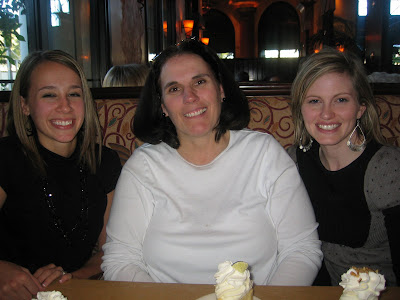 I have more pictures of our trip but I feel like I have posted a million already, and I really need to take a shower...
Posted by Hailey at 10:21 PM 8 comments:

My friends Jake, Matt, and Garrett made this short film for the 24-hour short film competition in last week's LDS Film Festival. They won "Audience Choice" and "First Place"!

Matt was in another short film in the festival called "Blind Faith" with my friend Brett. Finally, my friend Erin starred in TWO feature films that premiered at the festival, "Errand of Angels" about sister missionaries, and "Tears of a King" about Elvis' religious side. She was Priscilla! I am seriously star-struck by all of them!
Posted by Hailey at 1:50 PM 5 comments:

Flu, you are not my friend

And so I'm asking you to leave. I'm not even going to ask nicely any more. I've said "Please," I've made subtle hints like, "Wow, you've been here a week--I bet you're getting sick of us!" But you just keep on hanging out in the twins' room, messing up the carpets, making me do loads and loads of extra laundry, and eating me out of applesauce and bananas. I never get to go anywhere because I have to entertain you all day and all night long. I can't have friends over because you're such a clinger and it's just embarrassing. I consider myself to be a pretty patient hostess, but I loathe you. So far, you've managed to keep your distance from me and I appreciate that, but if you so much as brush my cheek, I will lose it. GET OUT OF MY HOUSE AND FIND SOMEONE ELSE TO ANNOY!

And on the way out, try to convince your dude bro, Winter, to leave with you. I know it's futile, because I know from past experience that he's going to stick around for at least three more months. It's hard to believe that we were so looking forward to his visit back in November. He was still the life of the party in December and everyone commented on his good looks all the time, and he's still charming on occasion, but most days, just really hung-over. I still love him, and I'm sure I'll be happy to see him next year. But at the same time, he's the one who introduced me to you, and so I will never forgive him for that.
Posted by Hailey at 11:08 AM 6 comments:

I Feel You, Cinderella... 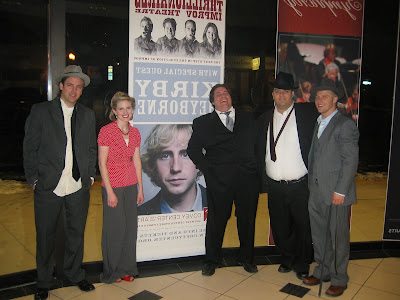 Last night was magical. It really was. Almost 700 people came to see us. You might be saying, "Uh, they came to see Mr. Heyborne, not you!" But he was one of us for the night, and we had a REALLY great time! The set was amazing, the theater was gorgeous, the band was to die for, the audience was a joy, and the talent wasn't too shabby, either. (If I do say so myself...) 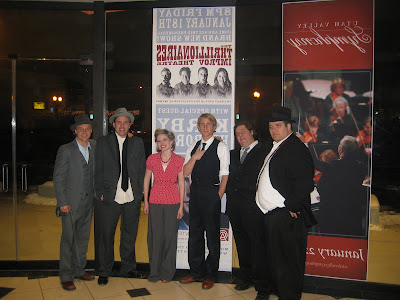 I know I say it all the time, but I adore these people and I am so grateful for this outlet in my life. Thanks a thrillion, you guys! 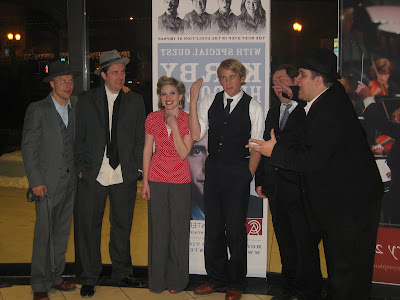 After it was all over, I came home to two major, up-the-back, down-the-leg diaper blow-outs, so don't you worry, I am keeping it REAL.

(Pictured, left to right, are Maclain Nelson, Brett Merritt, some chick in a red shirt, Kirby Heyborne, Jake Suazo, and Matt Mattson. You might be wondering why the poster is backwards in the pics. It's because none of us wanted to stand outside in the 2 degree weather and I don't have the patience or the know-how to flip the thing in Photoshop!)
Posted by Hailey at 10:32 AM 11 comments:

January Blues Getting You Down? 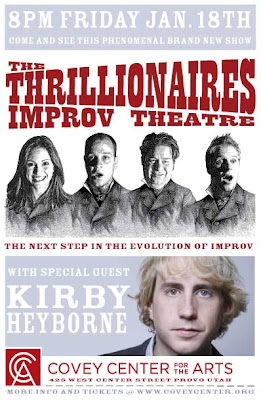 Have no fear! The Thrillionaires can chase those winter blahs away! On Friday, January 18, the Thrillionaires are kicking off the New Year in their new home at the Stephen R. Covey Arts Center, located in downtown Provo. We have invited Kirby Heyborne to come and be a guest performer for our 1940's themed play and musical. A live jazz quartet, put together by this guy, will accompany us with improvised music. The show begins at 8 and tickets are $10, but contact me for a $3 off coupon that you can use for any event at the Arts Center.

For those of you who have no idea what a Thrillionaire is, we perform live, improvised theater complete with costumes and music. We perform many different styles and genres, including Shakespeare, Western, Film Noir, Rodgers and Hammerstein, Jane Austen, High School Musical, and Sitcom. Don't miss this event!

(I've been meaning to post this for the last few weeks, but somehow my crazy life, a little baby vomit, and a whole lot of nasty diaper business has prevented me from doing so...)
Posted by Hailey at 12:58 PM 7 comments:

Happy New Year, everyone! I have lots to post about, but first up, I'd like to introduce a new blogger. I think she's amazing and her blog can be found here. I'm sure she'd love to hear from you!
Posted by Hailey at 11:32 AM 8 comments: