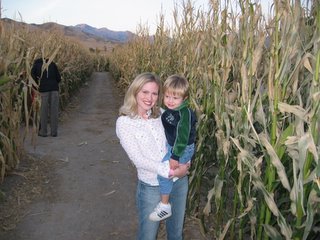 You know what? When it comes to FHE, you're darned if you do and you're darned if you don't. On Monday night, I thought it would be fun and festive to go to the corn maze at Thanksgiving Point for Family Night. We got there at around 6:30. It was a gorgeous evening, not too cold, not too hot--just the right amount of chilliness. Everything was going swell. I received $17 off our total ticket price with my season pass plus coupons, the kids were excited (well, at least Mila was--Ethan was a little skittish and insisted on being carried,) and Halloween was in the air. Ben's brother pointed out a sign that said "The MAZE will be haunted on Monday, Friday, and Saturdays." I made sure to ask the cashier girl about this, who assured me that it was only haunted after dark, and even then not until eight, so we had PLENTY of time. Yeah, I know what you're thinking: major red flag. But I was not going to let anything mess with my perfect plan.

We headed into the maze, laughing and dancing to the music that was playing, all the while following our cute little "tiny tots" clues. We got through the first phase pretty quickly and started in on the second. I noticed it was getting darker but it was only seven, so no big deal. We were almost to the end when we came to a clearing with a tetherball. (The maze had a Napoleon Dynamite theme--of course.) Because it was only 7:15, I told Ben and his bro they should go ahead and play. Ethan, at last feeling comfortable and safe, finally allowed me to put him down. The guys were having fun, the kids were giggling, and I was capturing this wonderful family moment with my digital camera. I was trying to get Ethan to pose for a pic when I heard a revving sound that seemed to be getting closer. "That's wierd, " I thought, "who the heck is allowed to ride a motorcycle in a corn maze?" No sooner did this thought cross my mind, then a clown brandishing a chain saw burst into the clearing and descended on my paralyzed children. All I remember about what happened next is lots of running and lots of me screaming, "BEN! BOONER! GRAB THE KIDS AND GET US OUT OF HERE NOW!!!" and "GET AWAY FROM US! WE HAVE LITTLE KIDS!" and "DON'T EVEN THINK ABOUT IT SWAMPMAN!!" After about thirty seconds of this we were in the clear and out the other end. I was a little bit embarassed about my gross lack of calmness in that situation, but there is a reason I don't frequent haunted houses--ever. I am so not cool with strangers jumping out at me in the dark. It's a good thing that I had my children there this time to use as an excuse to keep the bad things away. It's an even better thing that we were so close to the end and that the haunting didn't start back when we were in the middle because I think I would have just curled up into a fetal position and bawled. I had a hard enough time walking twenty feet out of there by myself without asking my brother-in-law to carry me, too. But since he was already carrying my daughter I figured that might be difficult, even if he is 6'4".

After the corn maze incident, we tried to erase the bad memories by taking part in the other, less life-threatening activities that were there, such as the cow train and the animatronic chicken show. But despite our efforts, all Mila could talk about was the scary clown guy. I tried to tell her that it was just a guy in a Halloween costume playing a joke, but she just kept saying, "I just can't think about it that way, even if I try." In other words, scarred for life. Ethan seemed alright until Ben tried to put him to bed and he just kept saying, "There was a green man in that scary carrot jungle..."

I wonder if I will be able to get them to go back for the "Fright Lights" show next Monday night...
Posted by Hailey at 4:39 PM

Ha! That's a hilarious story. Hilarious and traumatic, sorry about that. My favorite part: Your brother-in-law is named Booner?

Oh yeah, I guess I should explain that. His real name is Daniel, but his family has always called him Booner, I guess, because of Daniel Boone. I still get confused whenever anyone refers to him as Daniel. I have one of those moments where in my head I'm just thinking the whole time, "I have no idea who this person is talking about..."

Oh Dear! I don't do haunted houses either. Never have, never will. I just don't trust those people. If they came after my kids...oy. It would be bad...for them. Do you think you'll ever be able to convince Ethan to eat carrots again?

Buh! I didn't know Thanksgiving Point's Haunted Corn maze was that good. . . I would've gone had I known they have freakish chainsaw-weilding clowns on motorcycles--SWEET! Everyone knows there's nothing scarier than a clown; add a chainsaw to the equation and. . . dang! Sorry the little "plains" got scared, though. I'm glad I haven't already destroyed Lily's stable mental state, as I'm sure that clown surely did to Mila and Ethan. . .

I was about to beat Ben at tetherball, too. (me being the northwest crossing elementry school champion) And he thinks he would've beat me now. Stupid clown!!

I would have carried you, Hailey. I'm a giant freak Amazon woman!

That's what you get for trying to be a perfect family and doing a "family" activity on a Monday night----what are you doing...trying to be better than the rest of us? Heh, heh,...no, really the clown scariness must run in the family----Aydan sees a clown at the circus and starts to scream...even when its down on the field. I can ONLY imagine what he would have done with one wielding a chainsaw---running at him!!

Booner kept doing "ropesies" and then denying it. Even if he would have won, I would have appealed it.

What do chainsaw carrying clowns have to do with Napoleon Dynamite? They should have had a man shooting a real cow while you watch from a school bus.

Is it just me, or is the whole N.D. this is getting a little over done down there in UT?

Hilarious story, Hailey. I remember we let my little sister watch Stephen King's "It" with us when she was only 5 or 6. She was scared of clowns for years.

same thing with mila and elevators after alien resurrection.