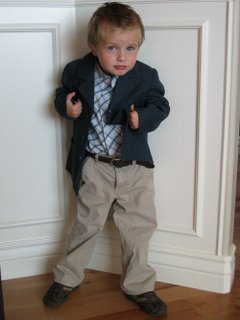 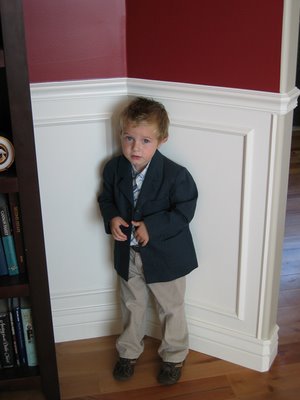 ** A "Smith" adjective, used to describe something that is amusing instead of laughing at it. Am I right about that, guys? I'm trying to get Ben to write a blog with a glossary of all the words.
Posted by Hailey at 5:39 AM

As I was putting the finishing touches on this blog, Ethan got so enthralled with his computer game that he took a dump in his underwear. How's that for poetic justice?

You forgot how he is always racing everyone everywhere... up the stairs, down the satirs, into church. If you ever happen to accidentally get somewhere that he just happens to also be going, before he does, he'll always say, "hey, it's not a race!" However, if he gets there first it's, "I win! You lose. Boys win... Etc..."

He did, indeed, ask Phoebe if he could kiss her, and she blushed and said yes. I saw the whole thing. So that means they have to get married, right?

As you know, I have the opposite problem at my house (poor Phoebe mixed in with 3 boys), so I know how you feel. Maybe we could switch kids--for a couple of hours-- so they can be in a testosterone/estrogene arena for a while:0)

Ohhh... fun! I want to see him! You really can send your kids to San Antonio anytime! :)

I was going to leave a sweet message about how adorable your little man is (that top picture made my womb go into neon-mode!) but then I just read your addendum about the dumping in pants, and I can't control the laughter. Moms are funny! You have to stay grounded when surrounded by irrational beings! I love it. Can't wait!

What a character. Very cute. I wish we all lived closer.

I love your posts. So funny! What a cute boy :)

I never tire of hearing about your kids. Your anecdotes always bring a smile to me face. Thanks.

What a ladies man that Ethan!!! He is simply adorable in that coat!!!

Well thank goodness green is finally out of the picture!

Cher and I have been waiting for another blog from you. Hope you are doing well with the twins.

Is that the outfit that we gave him? He looks sooooo adorable in everything that he wears! I can't wait to get one of those hugs for myself!

As always, I enjoy hearing about my G-babies...