You'll have to excuse me and my sentimental ramblings, er, journaling...

At this time last year, I was preparing for the end of the world. Armageddon, if you will. The Apocalypse. You see, I had never had twins before and so I had no idea what to expect. I made lists and lists of things that I would need to live off of for the next year, as I would surely not be going grocery shopping ever again. I bought obscene amounts of toilet paper and paper towels and macaroni and cheese. I made sure to get the house decorated for Christmas the second we finished our pumpkin pie because I had so much uncertainty about what my life would become in the near future. I was thinking about my state of mind at that time recently, and I just couldn't think of any other time that I have felt that way. I always have things to do, whether it's things I need to do or should do, but I have never felt such an urgency in my life as I did during that pregnancy.

It was even more surprising when the girls arrived even earlier than I had expected. I went to my scheduled ultrasound the Tuesday after Thanksgiving, and we discovered that there was some twin to twin transfusion occurring. Everybody's reaction went from "Oh, aren't you just the poster child for twin pregnancy?!" to "OK, it looks like these girls need to come out come out ASAP!" I went to my doctor that afternoon and we scheduled my inducement for Thursday. He said he'd prefer to avoid Wednesday because it was his anniversary.

"Sorry about your anniversary..." were my first words to my doctor when I saw him at the hospital the next morning. I had awakened at around 6 am feeling extremely uncomfortable, even on top of my carpal tunnel syndrome and case of the "crazy itchies." I decided to just kind of ignore it and when that didn't work, I got up and decided to take a shower. I came out of the shower saying, "Ben, we should probably get the kids out of bed and get them a very quick breakfast." I was trying to remain calm, while at the same time acknowledging the fact that those spurts of time between contractions were not getting any longer. We dropped off the kids at my amazing neighbor's house, who answered the phone at 7 am like she had been waiting by it for our call. 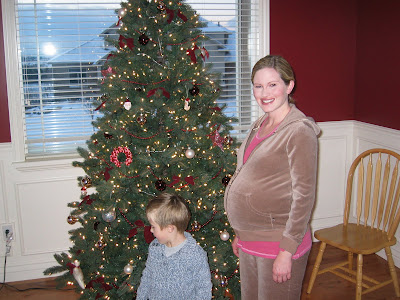 The rest is just your typical labor and delivery story, except this time I asked for more drugs and I had to deliver in the freezing cold OR with twenty people looking on. The extra drugs were as a result of my delivering Ethan, after the epidural had long worn off, to a nurse, because no doctor was yet present. My anesthesiologist this time around told me after I asked for more of the good stuff, "You're not going to be able to push." To which I replied, "Oh, you better believe I will." I'm sort of a champion pusher. Maybe it's even my special talent. As for my fears of there being no doctor this time? The good thing about having twins is that nobody messes around. The experts bring in "people" who, in turn, bring in their "people." At least that's how it seemed to drugged-up me. Luckily, I was able to deliver them the old-fashioned way, and yes, I probably pushed a total of five times for both. Take that, guy! Lucy was out at 11:49 and three minutes later, after a very red Lane emerged at 11:52, it was all over. (Except for the part where the respiratory specialist started pounding on Laney's chest to get her to breathe, but that turned out OK as well.) 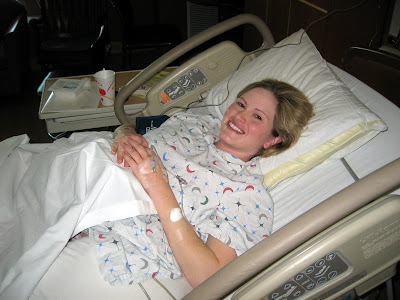 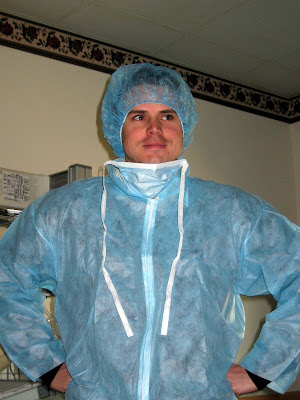 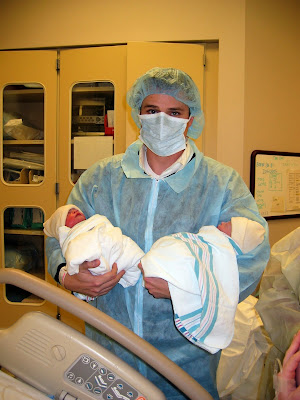 My girls, born four and a half weeks early, were "amazingly healthy" for preemie twins, as everyone in the Level 2 Nursery where they spent their first week commented. Going home from the hospital without my babies was the hardest thing I have ever done in my entire life. However, I have never been so grateful as I was to those nurses who took care of my girls 24 hours a day. I would sit in there and listen to a nurse calling people to get shifts covered, and I realized that if these women (and one man) didn't show up for work, my babies would not live. I owed them the lives of my children, literally. I loved being behind the scenes and seeing how the nurses would joke about certain pediatricians who were "all business" and how they would give so much love and attention to each and every infant in that room. It was a glorious place. Laney got to go home one week after she was born, and little Lucy made it to her benchmark birth weight of 4 lbs. the next day, not wanting to be left behind. The nurse assigned to Lucy on the day she went home even teared up a little as we were getting her ready to go, admitting that she had gotten somewhat attached to her in the past 24 hours. 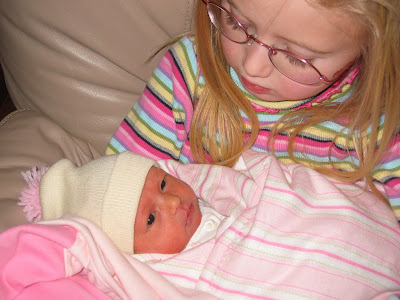 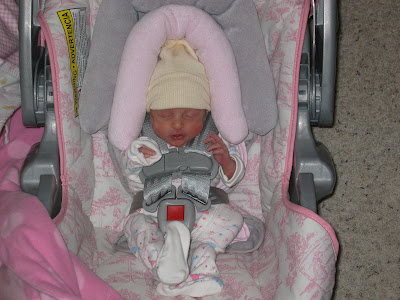 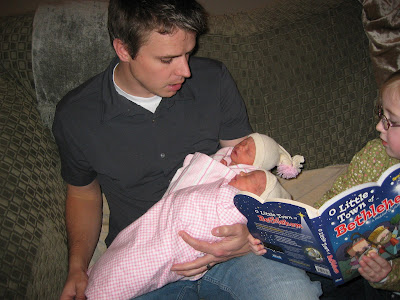 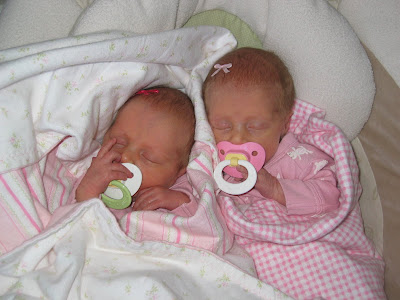 Once the girls were home, I worried that they were not staying warm enough. They had to try and maintain a temperature of at least 97 degrees. Usually, parents worry about their child being too hot--this was my first experience with it the other way around. Because of the twin to twin transfusion syndrome, and because of their difference in size, it was easy to tell them apart. Lucy was the little white baby, and Lane was the big red one: 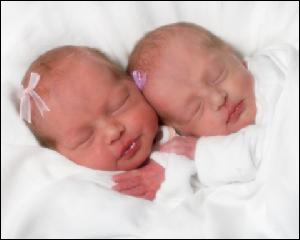 I lived in constant fear of illness those first few months. As my doctor lobbied to get my girls the RSV vaccination ("A common cold for your kids means three weeks in the hospital for the babies," she warned me), I strategically placed hand sanitizer all over my house and turned into a germ Nazi. I didn't take them out of the house until March, except for doctor's appointments. Oh yeah, and brief car trips for sustenance.The nights were hard, but most of the time, I truly felt like I had been invited to a party that was going strong 24-7 with no end in sight. It was just such an honor and privilege to be around these amazing, tiny human beings. They were, and still are, awesome little people. 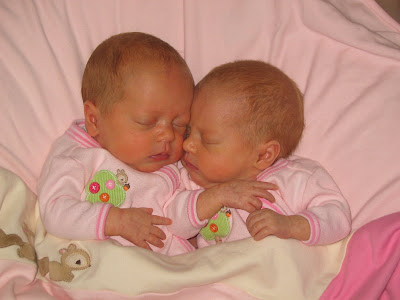 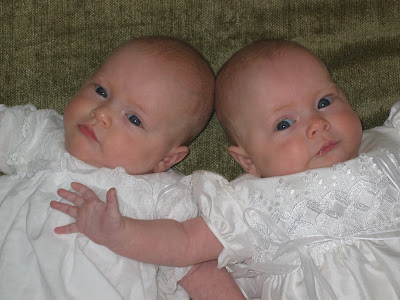 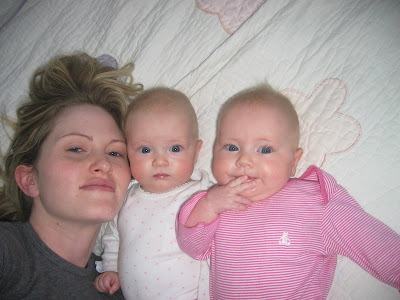 They will be one on Thursday, and so this week is a celebration. Of surviving a year. Of being a part of a world-wide "twin society" and loving every minute of it. Of the unexpected surprise that it has not been as hard as I had feared. Of knowing that the best years are sure to come. Of being able to buy the cutest coordinating clothes and having good cause. Of having the best family and friends that any mom could hope for. Of having two older children who adore their sisters and help out every day. Of only 6 months until Nursery! (I age three years every week at church. By the time they are 18 months, I will be an 80-year old woman...) 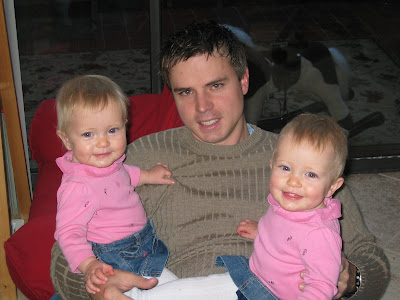 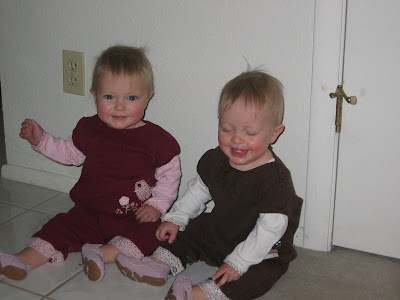 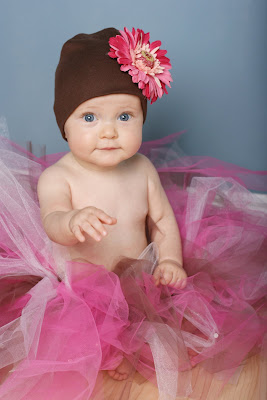 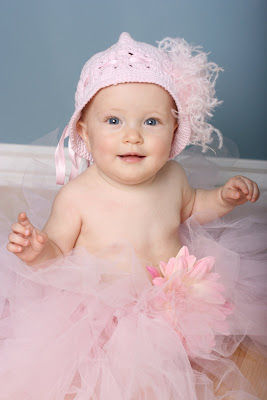 Happy Birthday, my angels! Thank you for always keeping the "party" going!
Posted by Hailey at 4:38 PM

I can't believe the girls are almost one! Time passes sooo fast!! Crazy. Can't wait to see you guys!

Beautifully expressed. Like I told you at Thanksgiving, you are amazing.

I love the tutu pics. I, too, am remembering why I hate going to church with a one year old.

You know I'm in love with those girls (and Hugh is, too!) and you've helped me be so, so excited for my baby girl. . .

Thanks for giving me another reason to have a cry session...

I know that I will be seeing them in less than a week, but I am already thinking about when I will be leaving and its making me cry all the more!
I can't stand being away from you and your beautiful kids!! It kills me!!

I miss that you guys don't live in your old, red, empty living room. Because 1. you guys were the funniest people at the neighborhood parties and 2. your yard has gone to pot.

Happy Birthday to your twinnies! I hope you have a fun week celebrating!

I love having twins with you, Hailey! It's like you say what I feel. Now I'm bawling... Happy Birthday, Lucy and Lane! Can't wait to see you at Christmas!

You truly are amazing!

I lughed and cried as I read this. I can't belive how lucky I am to have you as a daughter, and how lucky your children are to have you for a mom. You are beautiful, fun, smart, funny,unbelievably talented, wise, and creative! Thank you so much for sharing this with all of us and yes Hailey is MY daughter and Lucy and Lane are my grandaughters so read it and weep!!

So, bragging IS genetic.

Those are some dang cute babies. It was weird to see Ben on here. I guess our blog pictures are mostly kids, eh? Also, I think the 12 recently sent down a special rule allowing twins in the nursery early.

Oh. Mygosh. You are absolutely superwoman. Those little girls of yours are so incredibly darling, and I can't imagine Sunday School without them. :-D

Your blog brought me back to my special day in the hospital. It's been 7 months... Life speeds up after you have kids!

Your girls are beautiful. Truly angels!

That is such a huge deal. I am so impressed. You have a beautiful family....