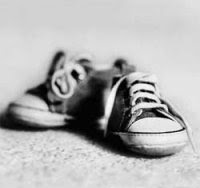 So, I'm in a play. And it is, in fact, called Rabbit Hole. It's about a couple dealing with their grief over the death of their four year old son. I know. It's so not a comedy. However, it IS a Pulitzer Prize winning play and it is, needless to say, pretty intense. Having said all that, you should come on out for an uplifting night of theater! But seriously, I don't think it's all that depressing and I think it's an incredibly realistic depiction of the different ways that people deal with loss. Although it's been kicking my bootay, I always love a challenge and I get to share the stage with my good friends Chris and Jenny. Another reason I like this play? The characters are eating various baked goods in EVERY scene (which is totally how I would grieve, let's be honest.) But the Broadway actors must have gained 40 lbs. during the run.

Anyway, you should come see it, if you dare. We perform May 1, 2 and 3 in the UVSC BlackBox Theater at 7:30 pm. The best part? It's FREE! (My director, Alex Ungerman, said we weren't supposed to say that because you might think free things mean crappy things, but trust me on this one. It's worth it just to see Chris Clark act-a rare treat!)

P.S. I love this song right now and I think it fits the theme of the play, don't you? (If you think that I pick specific songs to match my blog posts, then you are absolutely right and you win a prize.)
Posted by Hailey at 12:41 PM

A. I'm jealous you got to work on this play.

B. I'm disappointed I can't see it.

Oh man, I wanna come! But since I'm not one of those people who bring newborn babies to the theater, and since there's no one else who can fill her belly every three hours (I HATE pumps), I guess I'll have to miss this one. Break a leg!

Yay! Ingrid Michaelson! Yay! Hailey acting in a great play! Yay!
Chris Clark playing opposite you!
Yay! I got to run lines with you!

You're amazing, and so very talented---you will be wonderful!

Didn't you do something like that for a film before we moved from Utah. A couple dealing with the loss of a child? I could have sworn I watched the kids for an afternoon while you shot a scene around the point of the mountain.

I did, Kristen. It was very similar, actually, with even some similar scenes--weird. I never actually saw that film. Typical. But hey! Thanks for babysitting!

I think that you pick specific songs to match your blog posts.

What do I win?

I am not one for crying in front of strangers, but I would love to come and see your show regardless. Good luck.

Seriously, it was so good. You are amazing. And Chris was awesome too...but you had some amazing moments!

You were amazing. The cast was amazing. The play is well-written, and I loved/hated it because it was so real. You know what I mean! (and the play made me really, really hungry.)

Just wanted to stop by and say what a cute family, It is valuable that good young families share their ideals online and it reminded me of this thought by President Ballard: --Elder M. Russell Ballard, an apostle in the Church, told the mostly Mormon, graduating students at Brigham Young University-Hawaii to use the Internet — including blogs and other forms of “new media” — to contribute to a national conversation about The Church of Jesus Christ of Latter-day Saints.

I wandered over from Lisa's blog.

Missed the play. I miss lots of life, showing up late or not at all, not even knowing I'm late or that there were even an event to be late for.

I was so pleased to stumble on to your blog to find this Blogvertisement for
Rabbit Hole!
Thanks again for everything that you did to make the production a smashing success!
(and I don't even mind that you told people that it was free!)

Hailey,
I was so glad I got to see your play! My sister Amanda and I had a great time. It was a little heavy, but we were expecting it so it was OK. You did such an awesome job! I would love to see you in something lighter as well. I'm really interested in seeing Little Women, so keep posting about upcoming events.
By the way, I had the baby four days after seeing you. That night was probably my peak of pregnancy ugliness. My face was so puffy and red! The baby is a lot cuter outside of my skin than in.