I never wrote about my trip to Paris. And you probably thought that I didn't write about it because I hated it so much. But that is simply ridicule. Because I loved that dang place. And so I AM going to write about it, and it's going to be detailed so consider yourself warned.

On Monday, June 30, in the wee dark Romanian hours, Ben and I hopped on a flight to Paris. As sad as I was to leave Romania... Scratch that, Romania is a strange place, and three days in Bucharest was enough time for me to discover that I was going to starve to death there. Bring on the French!

When we got to Charles de Gaulle airport, I carefully rehearsed in my mind everything I was going to say to the cab driver. I really hoped that he wasn't going to ask me any questions because I knew I could speak French, but I just wasn't so sure I could understand real French people. However, when I told our driver the address for our hotel, he didn't look confused at all. He simply nodded and we were on our way. Our hotel was located on a side street that was off one of the "bicycle spokes" of the Arc de Triomphe. It didn't really sink in that we were actually in Paris until we first came upon the Arc. I could hardly believe it. We went inside our hotel and I geared myself up for more French. Turns out, everyone in the hotel and restaurant business in Paris speaks English. It makes tourist life easier, I suppose, but I could never figure out how they knew we were Yanks before we even opened our mouths. Ben and I spent much of the week trying to be as French as possible, short of smoking, as to fool somebody, anybody, into mistaking us for bonafide Parisians. I guess we lacked that certain je ne sais quoi, however, because they got us every time!

After dropping off our luggage, we headed out to find food, which is like the easiest thing to do in Paris EVER! There are cafes every ten steps you go, so it is basically my kind of town. We walked down to the end of the block and decided on Cafe Kleber. I ordered a tomato and fresh mozzarella salad, with chocolate mousse for dessert. Ben ordered something with some awesome au gratin potatoes. It was all divine. I loved sitting out there in the afternoon sun, observing all of the beautiful French people. There are many. There are also many not beautiful ones, and they are the Americans. Just kidding. Sort of.

Following lunch, we crossed the street to the Trocadero. We walked out into the middle of the square and BAM! There it was. One of the top ten sights that will be permanently etched in my brain if I suddenly go blind. La Tour Eiffel. Oh my goodness, it is so stunning in real life, I cannot even begin to explain it. I fell fast, I fell hard. It was A-mazing.

After standing in awe for a few minutes, we headed back to the hotel to rest for a bit. Paris was much like Romania in that you walk your little feet off. Maybe that is why Bucharest is called "Paris of the East," because I'm hard-pressed to find many other comparisons. Does it sound like I'm dissing Romania? I guess I sort of am, but I feel bad now because I really did love going to Romania, as crazy an experience as it was. Maybe I'll just say it's the difference between Wal-Mart and Target and leave it at that.

Nap-time was followed by walking back to L'Arc de Triomphe. We climbed up to the top and admired the Paris cityscape from every angle. I was beyond happy. Maybe you don't know that I studied French from ages 12-22 and had about four blissful semesters of French History and Culture at BYU. I don't remember everything, of course, but I was finally in the place I had been dying to see for the past twenty years. So awesome. 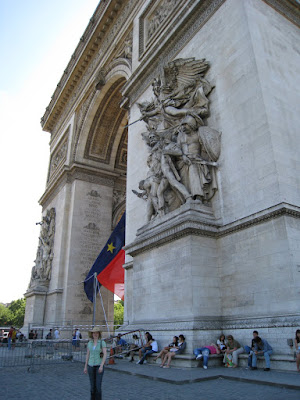 You really should make this one big so you can see my crazy facial expression.

We descended the Arc and headed up the Champs-Elysees. It was cool, but not really my favorite part of the whole trip. There were lots of stores and stuff, but I wasn't really that interested in shopping in Paris. Because what would be the point in paying three times as much for a shirt in Paris that I could get in the States? Call me crazy, but I was there for the food, the sights, and the history. We walked the entire length of the Champs and then turned towards the Pont Alexandre III. Along the way, we passed building after beautiful building. We crossed the bridge and headed back the way we came. We passed the tunnel where Diana was killed and then I'm not sure what happened after that. Dang. I knew I should have written this sooner. 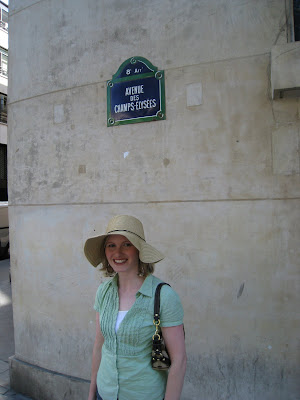 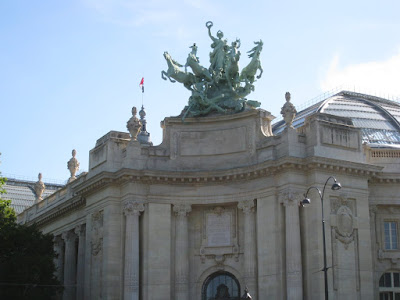 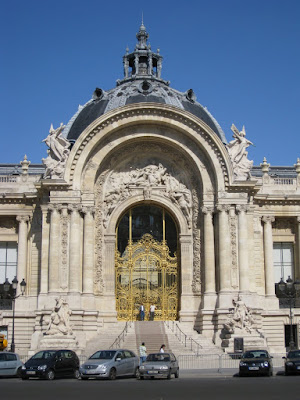 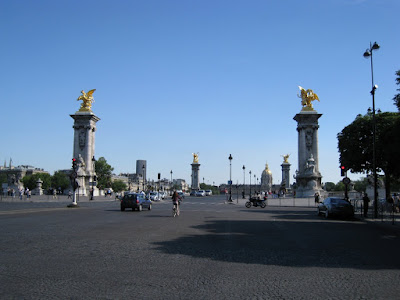 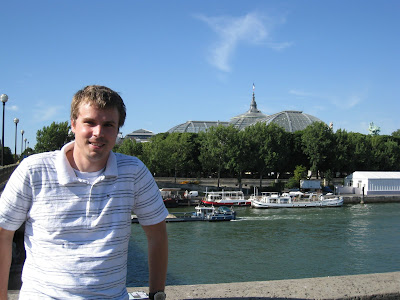 At any rate, we made it back to the hotel to change for dinner. Ben had researched all of the restaurants he wanted to eat at months before, and he'd made reservations at some of them. Ben is an even bigger foodie than me, if you can believe it. But the difference between us is that he likes super fancy food and I eat anything that tastes good. As we were leaving our hotel to walk to the restaurant, I noticed for the first time that we had a view of the Tour herself, right from our bedroom window, in fact. I was giddy. 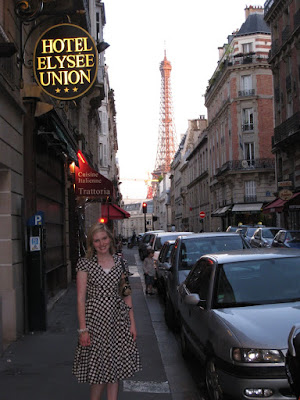 That night, we ate at a restaurant called Chez Georges. If you want to know the story behind it or why it is so awesome, you will have to ask Ben because sometimes I zone out when he talks about that stuff. It's only fair. Do you think he really listens to me when I talk theater? I doubt it.

The important thing about this particular dinner is that I really embarrassed myself. I ordered prime rib in French and felt pretty awesome until I got a bowl of curly rubbery things, which Ben guessed was maybe beef fat. Sick. I tasted it and said, "I believe this is calamari." Which it was. It turns out that the word for prime rib, entrecote, is very similar to the word for calamari, which is entre-something. So, basically, it wasn't my bad French, but the waiter's mistake because he very clearly saw what I was pointing at on the menu while I was so "confidently" ordering in French. He must have scribbled "entre" on his pad (I can understand, I was a waitress, after all. Chx, anyone?) and then didn't realize his mistake. And if he DID realize his mistake, he probably wondered why in the world the blond bimbo in the polka dots was mistaking calamari for beef. What kind of moron does that? Well, maybe the kind who is terribly non-controversial in her own country, and therefore to the umpteenth degree in a foreign one, that's who! I just could not bring myself to send it back. And so I sat there and chewed my squid. And that's how my first restaurant dining experience in Paris turned into a total bust. You can laugh at me--lesson learned.

Later that night, I opened the doors to the balcony of our room so I could see the pretty tower. It just so happened it was sparkling all over at that moment. A magical ending to a magical day. Except for the squid part. Gross.
Posted by Hailey at 6:39 PM

Please promise that if you ever go back there, that I will be with you!! I would love that trip!!

I'm tres jaloux! (Yah, I had to look that up because for some reason they never taught me the word jealous in High School French class). You look very Parisenne in your polka-dot dress. And at least you didn't accidentally order frog legs!

Bummer about the rubbery calamari. But I don't feel bad for you because you were eating it in Paris :P j/k I am so glad you are finally writing this because if I go one day, I don't have to make an agenda.

Sorry, that was my brother checking his email at my house there. That was me.

Love your stories, love your hat, love your polka dotted dress... and I love your blog music! Now, I'm ready for Paris!

I totally agree on Paris!! I can't wait to go back!! We got to spend only 3 days there and that was definitely NOT enough!

I can't believe you had never been to Paris before. That idea seems bizarre to me. Anyway, glad you enjoyed day 1. Are there more days coming?