"I Know Seymour's the greatest, but I'm dating a semi-sadist."

It's not very often in musical theater that you get to sing a ballad containing THAT particular rhyme. However, I get to do just that as Audrey in "Little Shop of Horrors," now playing at the Hale Center Theater in Orem. 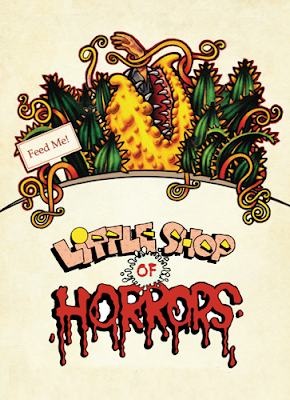 As a kid, I watched the movie version with Rick Moranis and Steve Martin. I thought it was funny and quirky and altogether entertaining. Imagine my surprise when I was 15 and my mom took me to see a live theatrical production starring a friend of hers. I had no idea it was an actual musical that real people could be in! I enjoyed it all the more and fell in love with the music and characters. It has remained on my top five list of musicals since that time.

So, now I have to thank Ben for letting me check off one of my dream roles by participating in this production. And what, you ask, is all that desirable about a man-eating plant in New York City in 1960? And my answer would be, why don't you come and find out for yourself? If, for nothing else, just to hear the Doo-Wop girls tear it up in their AMAZING songs. (I might just have to lock one of them in a closet one night and go on in their place, but I think that my pasty white skin would be a major give-away.) I will be performing in the show on Wednesday, Thursday, and Friday nights (with the exception of Oct. 1st) from now until November 21. Go here to get tickets. Disclaimer: This show does deal with domestic abuse and plants eating people, so you might want to leave the kids at home. My kids, upon viewing a preliminary run-through, just wanted to climb inside the plant, and make it chew up each other. I totally let them.
Posted by Hailey at 3:50 PM

That would be a fun part to play! Maybe I can convince jake to let us drive up and see :)

I am so glad you get to play a dream role of yours. I just don't know if I can believe you that it is the best musical. The movie creeped me out as a kid and gave me nightmares. "Feed me Seymour, feed me". I wish I could come see u in it to change my mind. Have fun!

I'm so excited to see you! I absolutely love living vicariously through you when you get these roles that I have always wanted to do----but am way too ancient now! :)

I will just have to hold back on joining in....

Kristen, it's the actual music that does it for me. The complete score for Little Shop is so superior to so many other musical scores, IMHO.

Totally wish I could come see!!! I bet you'll be great!!

I grew up watching this movie, I can WAIT to come see you in it! You'll be fab, I have no doubt. Any chance you can get out of your show on the 23rd?

I love the music from this show! In high school, my junior year, our marching band's show was all 'Little Shop' songs. (I know, marching band, right? Doesn't compare with being on stage, but still so much fun.)