...and I am not. And we're surviving. And no, he's not hunting vampires, although if he was, maybe I could write a super special book about it and become a millionaire after every last person in the universe read it. But no, he's working (for free) at a law firm in Bucharest and the work is kind of boring so he mainly just looks forward to the weekends when he and his friend make excursions to Dracula's Castle (to hunt vampires), so I'm so happy he's enjoying his playing, ahem, working.

Because Ben won't be here to celebrate Father's Day with us (I'm already suffering panic attacks thinking about another Sunday in church alone), I thought I would post a few recent gems that have proceeded out of the mouth of his seven-year old, who, I am fast learning, might just be a carbon copy of her father.

Mila was playing Monopoly with my friend Jenny when she was babysitting and Mila demanded, "Jenny, give me my rent!" When Jenny reminded her to say "Please," Mila retorted, "This is business!"

Yesterday, when we were driving to T-Ball practice, I was encouraging Ethan to exercise his free agency in standing up to his bossy friends. Mila jumped in and went off on a tirade, which included the following:

"This is a free country. This is America, not...England! England has a king who tells you what you have to do and you have no choice but here in America we have a President who lets you do whatever you want!"

It seriously went on for at least five minutes. So. Awesome.

Finally, Ben told me before he left that Mila approached him one evening while I was at rehearsal with great concern. She said quietly, "Daddy, I said a really bad word today, but I didn't try to..." When Ben asked her what happened, she told him that she had been making up silly rhymes and after she made up one with the word "duck," all of the kids in her class started to laugh at her. They told her that she had said a bad word and she had no idea what they were talking about, but she was super embarrassed.

That story breaks my heart for a number of reasons. First of all, why did all of the other kids know THAT word? Seriously. Wake up, parents! Also, that particular bubble of innocence is burst forever. My sweet little girl now knows that word for the rest of her life. Poor little thing. I'm so glad she's made it this far at least. You guys, I just might die when she gets to junior high and high school. We're all about taking it slow here. I mean, maybe, if she asks nicely enough, we will let her go on a date when she's eighteen. MAYBE.

**Happy Father's Day, babe! I will never forget the day Mila was born and I saw you transform before my eyes. I have never seen a grown man push a little baby cart around with such pride, or swaddle a tiny 6 pound thing with such care, or insist on changing every single teeny diaper. I fell in love all over again. We miss you! 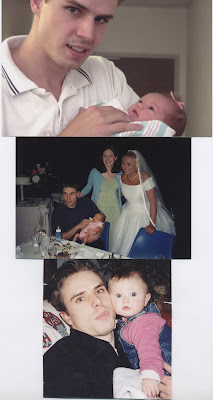 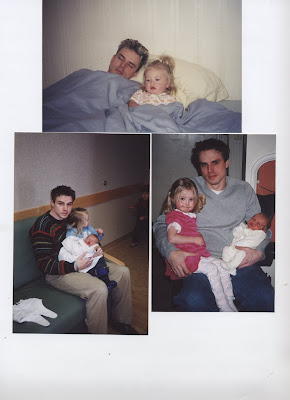 Romania huh?! He couldn't find anywhere closer to work for free?! Mila is so cute. I sometimes hate the things my kids learn at school.

Wow, Ben looks so young. Ethan looks exactly the same except he is not a newborn. I can't believe you have a child old enough to be baptized...in a month. Crazy!

Yea. I remember visiting the US as a child and other kids asking me what it was like to be from a country that wasn't "Free". .... The communist regime of Canada.

I pretty much chalk it up to American arrogance/ignorance, and I am actually a little surprised that American kids STILL get that impression, that theirs is the one and only free/true/good country in the world.

I guess I just don't think it's very cute at all.

But Mila is still awesome and pretty funny.

Hahaha! I love it when you get a glimpse of the way your kids see the world--so glad we don't have mean old king like they do in England!

Well, I like it when kids are proud of their country! They should be---its a great country! And as for the bad word---Aydan hasn't said that one yet, but he told us the other day that a boy was saying a rhyme in his class about doing something to his pickle...and I don't mean the kind in a jar. Hmmmm, I suppose that you get my drift...I was HORRIFIED!!
And he's only in the 2nd grade...

Mila says the cutest things. I can relate to how she found out about the F word... I found out ryhming too2... had no clue what it meant. Haha. Cutie young Ben in the pictures!

oh my heavens, I remember Mila being that little!!! Such fun pictures...hang in there...almost your turn for vacation!!!

I'm just confused how Dolph Lundgren got in amongst those pictures of Ben. Second to last one, with the covers pulled up to his chin.

Ah, I finally figured out the "mystery book" from a million blogs ago. Apparently, I was the last one in the universe to know about it and read it. Sorry, Hail-bop, but I plowed through it. It was definitely like eating a candy bar - a little self-indulgent and naughty, but instantly gratifying. Although I liked the formula better when it was on TV as "Roswell"...

I am sure Aidan was the first to inform Mila of what she said. I apologize. I was raised by sailors.