I felt like I had walked into an episode of The Amazing Race today. We left our hotel, then walked to the underground metro station. We took the metro to the Gara de Nord, the train station. After we bought train tickets, we walked around for a while then took a taxi back to the station. We then rode the three hour train ride to Braşov. Amazing Race, we are ready for you!(But only if it's in Romania...)

The train was hot, humid and stuffy. We were hesitant to open the window of our compartment as there were two older Romanian passengers sharing it with us and Ben informed me that old people there are afraid of wind, because it might make them sick. So we spent some of the trip standing outside in the hall, at the window there. A lot of the Romanian countryside was beautiful, especially when we got into the Transylvanian Alps. We passed one village that we did not have time to visit called Sinaia, home of Castle Peleş, the residence of the exiled king. Maybe next time...

We finally arrived in Braşov, which was originally a Saxon fortress complete with high walls and a moat. It is nestled up against the mountains, and is home to the Black Church, given its name because it nearly burned down and the walls are still blackened from the smoke, but they spent much of the twentieth century restoring it. 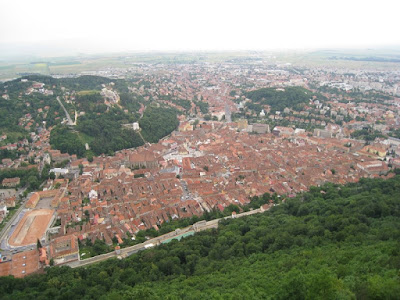 Right off the bat in Braşov, I had an unusual experience. I went to use the bathroom at the train station. Inside the bathroom, a very thin woman with a deep voice came up to me and started yelling something. She held up some money and pointed to the stalls and I got super confused. I went back out to Ben and asked him if I needed money to go to the bathroom, all the while being followed by this loud, jabbering lady. He gave me 1 lei and told me I needed to pay a tax. I gave it to the lady and she threw it on the floor. Another woman picked it up and handed me three squares of toilet paper. I had to pay to pee. I instantly thought of "Urinetown." After I came out, Ben asked me,

"What was that man doing in the women's restroom?"

"The one yelling at you."

Maybe it was his short shorts and very thin legs, or his long, stringy, dyed blond hair, or the fact that he was hanging out in a ladies' room, but I seriously thought that dude was a woman.

We took a taxi to the piaţa, or plaza, in the oldest part of Braşov, and we had lunch at a restaurant. Again, I was not in love with the traditional Romanian food, but I did get to order a Pepsi. I figured that if I stayed long enough in Romania, I would undoubtedly lose 10 lbs. When I sit down to eat, I like to EAT. None of this starving stuff. Especially after so much walking. 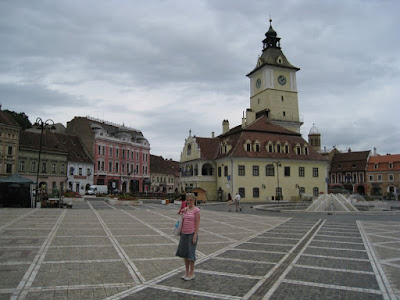 After lunch, we toured the Black Church, then hiked up to the old walls of the fortress. 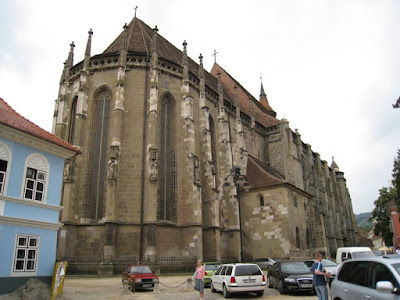 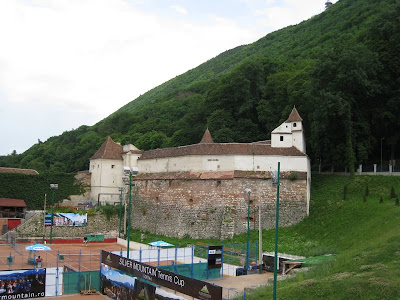 We walked along one stretch of wall to the telecabina, or tram, that takes you up to the top of the mountain. Along the way, we passed a man and woman who were yelling at a little girl climbing up the hill. Ben translated. He said that the man was telling her that he was going to throw something at her head. The family ended up being in the same telecabina with us and after we all got off at the bottom, he was yelling at her again. "Now he says he's going to kick her," Ben said. So I felt better about my parenting practices at that point and scored one point for America for not generally screaming out threats of abuse in public.

Speaking of kids, you don't really ever see them in Romania. Every time I did, I would get so excited: "Hey look, Ben, a cutie little one!" Ben explained to me that people don't usually have kids until they are older (just like in the U.S.) and then they ship them off to live with their grandparents in the country until they are teens so both parents can work (not like the U.S.) He said one single woman he worked with wanted to raise her own kids and no one could believe she would be so crazy. She also said that she didn't like her mom that much, but adored her grandmother. Go figure. The thing is, Romanians all wear these stony expressions all the time and no one smiles at strangers or even looks at them. It was nice being a tourist because you can be invisible, but the general moroseness can be unsettling. However, the few Romanians I saw with children were completely different. They smiled and laughed and were lively (OK, with the exception of Mean McGrumpy Dad in Braşov)and it made me so happy to see that. It also made me miss my babies!

After coming out of the telecabina station, we visited another bathroom and paid another tax. Near as I could tell, you are paying a tax to have them keep the floors super clean, because both of the floors of the bathrooms I had been in were freshly mopped and both attendants stood there holding mops, ready for anything, I guess. I mean, what else is there to keep you occupied if you're a toilet tax collector? Re-fold all the toilet paper squares, mop, fold more, mop again... It has probably made it on my list of top ten least desirable jobs.

It started to rain a lot at that point so we booked it to a taxi and got back to the train station. Nothing too exciting happened on the way back to Bucharest, except that I took a nap and at one point a man came sliding down the hall pushing himself with his hands, as if his legs were paralyzed. He went from compartment to compartment, asking for money. All the Romanians just stared at him or ignored him completely. Ben told me that begging is illegal and Romanians are racist against gypsies. He also added: "How in the world did he get on the train in that condition?" Naive me. I hadn't thought of that...

After we got back to the city, we took a taxi to Benihana at the Howard Johnson. You know you are in a strange country when you walk into a Japanese restaurant and feel like you are home again. It was awesome. The only other couple at our hibachi was an Italian couple. The man spoke a little English and so we asked him why he was in Romania. He said he had come there to go to Benihana. What are the odds? It turns out, he owns a Japanese restaurant in Rome called Shinto and so he visits other chains to see how it's done. He is, after all, from Rome. At one point, his wife almost put an entire glob of wasabe in her mouth. We were relieved that her husband caught her just in time. With the exception of us and two other tables, the entire restaurant was empty the entire evening. Those Romanians are missing out on a little piece of Japanese-American heaven. Also, I really want to go to Rome-maybe in another ten years...
Posted by Hailey at 3:30 PM

The toilet thing sounds very uncomfortable. I might have cried. Or peed my pants.

I remember some bland, soupy Chinese in Berlin that was like heaven. And mexican in London. And benihana in cancun. This American girl doesn't like to eat the same fare day after day.

I was worried I would have to pay a tax to use some restrooms in nyc too. I had heard of that before. I'll go to Rome with you in 10 years. :)

Ewww, I am still worrying about how you were able to just use three squares of toilet paper! Did you have to wait until you went to France to have a BM?

That would stress me out.

Maybe you could just pay two or three times when you had to go number two---and find some way of sign-language-ing it to them...
Hmmmm...

Since when do we not threaten our kids in public in the U.S.?

Thanks for the detailed post. I love to travel... even if it is vicariously.

(To the unmighty...) Sure, we threaten our kids here. But taking away XBox or even spanking is hardly the same as threatening to kick or throw stuff at their heads.

Sounds like you're having fun! Europe makes you pay for everything--peeing, relaxing on the beach...That's why we love Europe right? :)

The public bathrooms at the train station in Vienna charged us too. I'm thinking the equivalent of 50 cents or maybe even a dollar. Outrageous!!!

Have a great time. Your pictures are great. :)