This is what happens when I ask him to "smile normal" 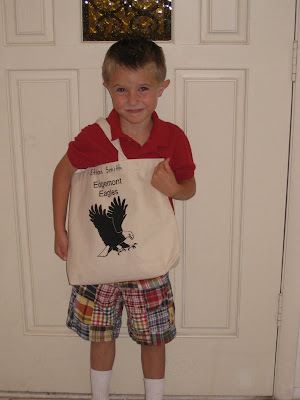 So far, the first week of Kindergarten has been quite nice (it helps when you're out of the state for most of it.) He seems to love going, and says he is "the best rule-follower in the class!" I don't even doubt that.

Tonight, he and Ben were tossing a ball back and forth and Ethan was trying to catch it three times in a row so that the war would end. I'm not sure what war it was, but I only know that my role was the sick mother who was bed-ridden (I always try to cast myself in the lazy parts in make-believe games) and Mila was reading me stories and making me imaginary soup. After several fumblings of would-be third-time catches, Ethan laughed hysterically, as he is wont to do, and exclaimed, "Every time it's the third catch, I think of Cash Cab and it messes me up!"

Cash Cab? Really? I have never even seen that show--when has he? I'm not sure I want to see it, though, now that I know how much it might affect your performance in high-pressure situations. I mean, imagine the horror of being onstage, doing improv, and the only thing in your head is Cash Cab? Poor kid. After we took some of the pressure off, he relaxed, cleared his mind and ended the war. AND the sick mother was healed. A night of triumph, all around!
Posted by Hailey at 8:52 PM

Every time we hailed a cab in NYC, I secretly thought, "maybe this is it!" I think the driver/game show host is pretty attractive.

That is hysterical. Incidentally, I LOVE Cash Cab, and it's SERIOUSLY intense and I want to be on that show someday. Best premise for a game show ever.

I'm going to have to check out Cash Cab now. What a cute kid. I can't believe he's already in kindergarten!

Cash Cab scares me. It would make me look too stupid, I'm afraid...

As for playing the lazy parts in make-believe games---don't you remember how I always wanted to be the lady who got her hair done or the mannequin that needed her accessories put on--i.e. scarf, etc.? You must have gotten that one from me. :)

That is so funny. Seriously, your kids crack me up!