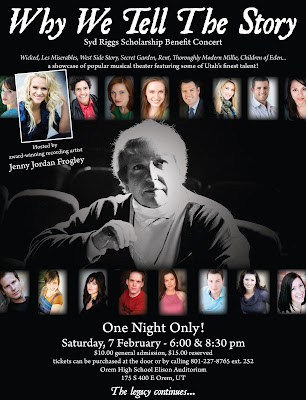 With a cast of close to 100, performers have worked on Broadway, in national and international tours, film, television, in the recording industry, for Disney, in professional dance companies, and cruise ship/theme park entertainment

*All proceeds will go to the Syd Riggs Scholarship

The information above is taken from the Facebook event, however I'd like to add a few things.

For this production, I will be singing two songs as Jo from "Little Women" and one song as Eponine from "Les Miserables." I know what you're thinking, because it's what I was thinking: "They couldn't find anyone else in the ridiculously talented Utah County to play two seventeen year old girls?" The truth is, the girl who originally sang Eponine in Syd's production is currently on Broadway (she also has a delightful blog) and couldn't make it, so they asked me. Hey, I'll be poor man's Broadway any day! OK, so I'm really nervous, but as always, love a challenge.

As for Syd, I first really met her when I auditioned for "Lucky Stiff" at the Hale in Orem in 1999. I was very nervous, but Syd was so welcoming and warm. I got cast and had a blast working with everyone involved. Syd was very kind to me, and I always felt guilty after "Stiff" that every time she asked me to audition for another play she was directing, I was either in a BYU production, or pregnant, or had some other valid excuse. I totally planned on working with her again some day, but she passed away unexpectedly in 2005. Syd has impacted so many people in a positive, life-changing way, and I feel lucky to have met her. I am very honored that I was asked to be a part of this benefit show. If you love Broadway music, I hope you can come!

P.S. I am only advertising this show because I know everyone already has their Mindy/Thrills tickets, right?

(Also, Ben said I look mean on the poster, but I told him it's only because I have a serious expression and I'm in a row with a bunch of smilies, and that if I were in a row with other serious people, I wouldn't look mean, I would simply look like the serious actress that I am. So what do you think? Mean, or just intense and mysterious?)
Posted by Hailey at 11:48 AM

You look mean in your profile pic, too, and there are no "smilies" to blame it on. :) (There's one.)

Ooh, you better watch it, Ben, or I'm going to post that one pic of you. You know the one...

lol, I want to see the pic of Ben. I don't think you look mean. I do think when people smile they look better though.

You are gorgeous! You look very sexy and mysterious---thats all I'm going to say...

How fun! The eveniing sounds awesome...wish I could come! You'll do great!

I wish I could make it and hear you sing! Break a leg. I'm sure you will be awesome :)

It's really great to have a certified star in the family, and a humble one at that!