Christa and Lovies by Bubbie Blue!

Once upon a time, I started my freshman year in high school in Claremont, CA, and I didn't know anyone because I had just moved there from Winnetka, IL (incidentally, the movie Home Alone was shot in Winnetka while I lived there and the snow is fake, but that's neither here nor there.)

Not too far into the year, I met a girl named Christa. Christa was wearing the same black and white houndstooth Esprit pants that I owned, and she loved to perform, and she was the skinniest person in the world. Fast forward eighteen years, and Christa has an adorable, curly-haired baby boy and her own business, called Bubbie Blue. Because today is Christa's birthday, and because I adore her so, I wanted to make sure everyone knew about Christa's handmade lovies. 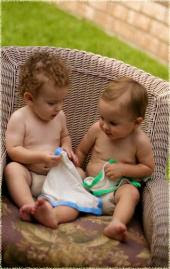 The following is from the Bubbie Blue website, where Christa describes how she came up with her idea:

"After our son was born in 2007, I started paying closer attention to the kinds of products and materials that came into our home, and began “greening” our family as much as possible.

As "the Bub" grew older, we decided that something had to be done about our continued lack of sleep.

I read almost every book on the market, and with my husband's help, set to work sleep-training our little guy. For us, the trick was in what the experts called a “transitional object” and experienced moms called a “lovie”.

I searched boutiques, bargain stores, and the Internet for a lovie that we felt comfortable leaving in our guy's crib, but the products I found were bulky, difficult to wash, and inevitably, made of synthetic materials. Frustrated, I decided to take matters into my own hands. A friend offered a
lightweight, organic swaddling blanket, which I cut into two small squares and hemmed, adding a border of ribbons… and they were a hit! They were just the right size and our baby loved playing with the ribbons. Plus, we were relieved that the materials that were so often pressed up against that little face were free of any yucky synthetics!" 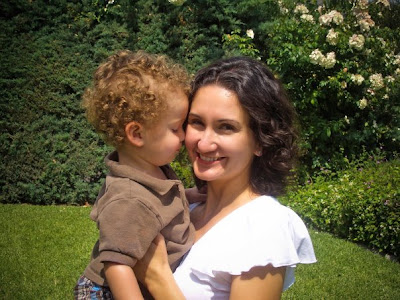 Christa and "the Bub"
I think it's a fabulous idea and I only wish I hadn't had a million kids already when she came up with this! Ethan and the twins have all had stuffed animal lovies but they are difficult to replace and get kind of gross, so a little blankie would have been perfect! And Mila was obsessed with the tag on her blanket so the little ribbon tags are ingenious!

The best part? For the month of August, all lovies are 20% off! I'm planning on getting some for the new and upcoming babies in my life (not my own, mind you)--I think it's the perfect gift! And no guilt, because it's GREEN!

And now, because I've got Christa on my mind, I'd like to continue waxing sentimental...

During our four years at Claremont High, we had all sorts of adventures together. Fortunately Unfortunately, I couldn't find many pictures of those awkward, early high school days, so here are a few from our senior year: 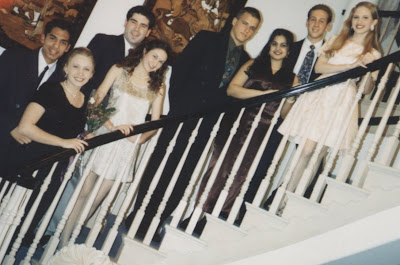 This was before a Preference Dance. Christa is in silver, I am in pink (I was going for Veronica Lake hair, but it was pouring rain, so my finger waves lasted 3.5 seconds.) The other people, l-r, are Eddie, Heidi, Richard, Mark, Puja, and Brandon. We were in Puja's mansion. 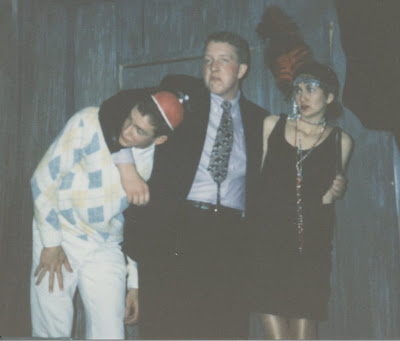 This was when Christa starred in the Dinner Theater show. She was the cutest flapper EVER. Also pictured, Ben and Joel. 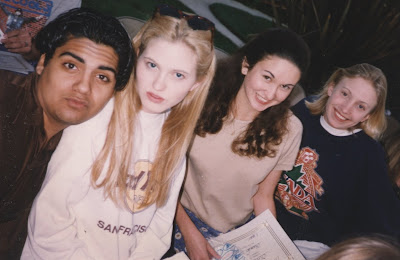 Our Choir Awards Party. Now you know that my efforts to be THE whitest person on the planet began years ago. Also pictured, Mario and Heidi. 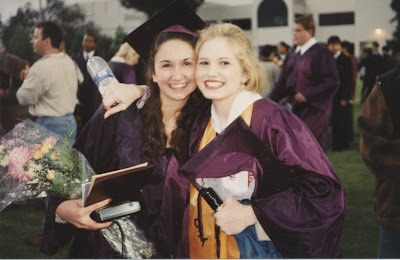 Graduation Day. It poured rain again. And I chopped off my hair a couple of days before. 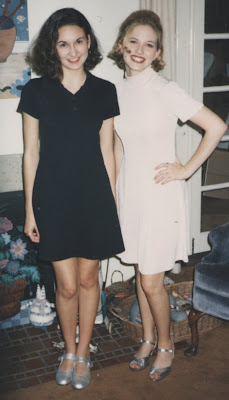 I think somebody watched Clueless a few too many times. Not you, Christa, you look cute.
In the fall, poor Christa went to live in this awful place called Malibu so that she could attend Pepperdine, while I headed off to Utah. After that, we saw each other at holidays and over summer break. 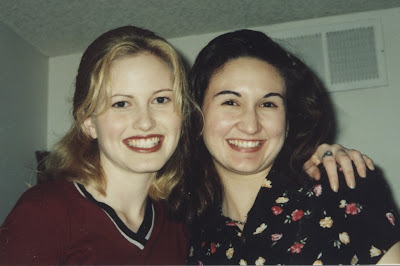 Then, the summer after our sophomore year at college, we actually decided to live together in my step-dad's house. Don't worry, my step-dad, Bret, didn't live there--he lived with my mom, of course! But he just happened to not want to give up his cute little house (with no A/C) in South Pasadena, so Christa and I moved right in! I have a lot of good memories of that summer. We shared a room and went shopping for groceries, and bought a couch together, and did chores, like putting Bret's dogs out in the morning and sweeping up the dog hair before breakfast, you know, stuff like that!

We made a list of all of the fun things we wanted to do that summer, which I believe we called "Hailey and Christa's List of Fun." It listed activities such as, "Go to the beach," and "Go to Disneyland," and "Be awesome!" Probably not that last one, but you know that's the kind of list it was, us being 20 and all. We got jobs as waitresses at The Valley Hunt Club in Pasadena. "Oh, is that the country club famous for starting the Rose Parade?" you ask. Why, yes, yes it is, now don't be jealous that you didn't get to wear a horrific forest green waitress dress (we lovingly called the "green meanie) and serve marmalade to old rich men by the name of Guglielmo. We had some good times at the VHC, but mostly we enjoyed smuggling home VHC chocolates in our green meanie pockets. They were to die for. (Christa, I could not find the picture of you in the green meanie anywhere!)

In the afternoon, if we didn't have to work, we had "nap time" in our room, and if it was 114 degrees outside, we had nap time all day long. We listened to music and sat on our front porch and played with my cat, "Kitty." We also spent part of the summer trying to think of things to say to the cute boys that lived next door to and behind our house. One night, we heard them outside and we casually walked by and said, "Hey... how's it going?" and nothing else, and kept walking. It was not our proudest flirting moment. By the end of the summer, we had become friends with them and we'd walk to Trader Joe's and watch "Strange Brew," and one of them was in love with Christa, and she went back to Malibu and broke his heart, so I'd say our job was done there.

Here is proof that I am not making all of this up: 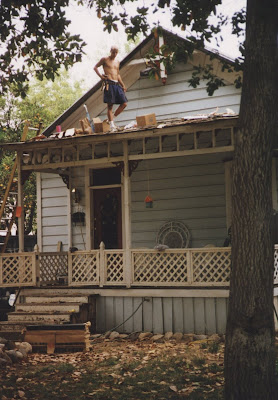 This is our little house, while some skinny guy is roofing it. I ended up having that guy's four children. I guess I liked that roof job. Just kidding, I knew him before he roofed my house. 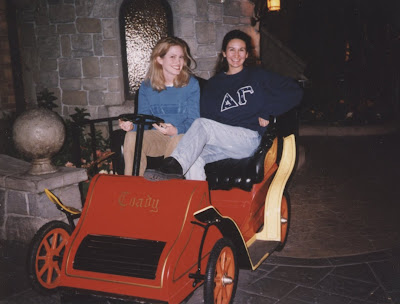 Christa actually worked at Disneyland at one point, so we sneaked in for free. 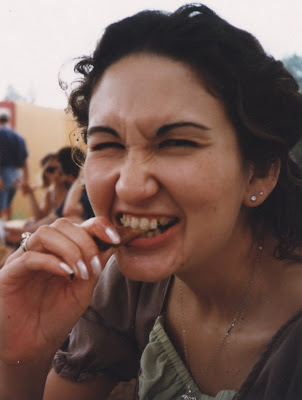 This is when we dressed up and went to the Renaissance Festival. We ate meat and we liked it! 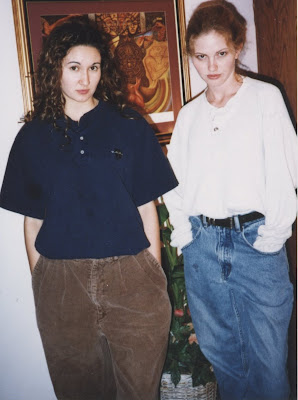 After the Renaissance festival, Christa's parents took us to dinner. We had no normal clothes with us, so we borrowed some from Christa's brother. 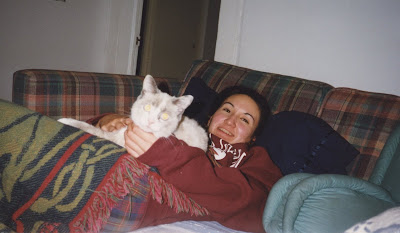 Christa and Kitty, on our couch that we bought. 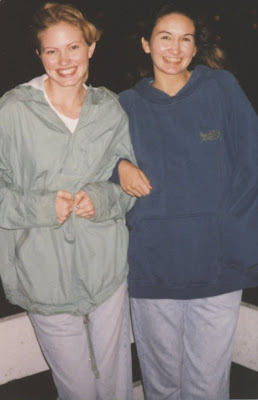 One of our beach trips, this time to our friend Ben's beach house. Not the roofer Ben.

Like I said, it was an amazing summer. The next summer, I got married and stayed in Utah permanently, and Christa graduated from college and taught school, and stayed awesome. This is when I got to fly down to go to Christa's beautiful wedding to Mike: 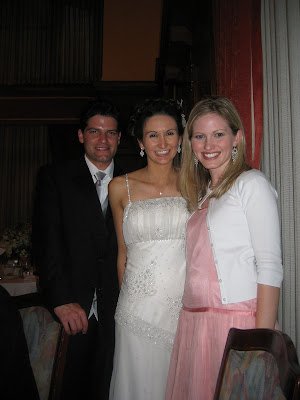 Happy Birthday, Christa! You are still one of the sweetest, most adorable people I have ever met and I love you! 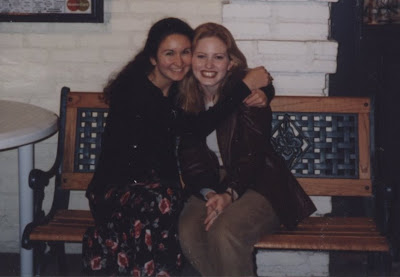 Nothing in the world like a bestest bestie! Love this post and the glimpse into your fun!

Oh, hailbop you're the best! I was laughing so hard I was crying reading this! Has it really been 18 years since our danceoff for Louisa (where I asked if your mom was your sister and got cast as the maid, and then kept spilling all the drinks and busting the doorknob off)? I especially like the documentation of my "freshman 15". Yikes! I have a picture of the green meanies which I will send you if you send me that graduation photo! Oh man... Remember mr. Peagram's plaid golf pants? And when I woke up all confused at the Warners' and fell out of my bunk? Thanks so much for this peanut buttah! What a great birthday tribute! Love always, Jelly

Yes! I need the green meanies! And freshman 15? Puh-leeze. So you weighed what? 105 after that?

Oh VHC--what about that lady who was the hostess? What was her name? The blond with the jacked-up teeth? Remember her laugh?

Loved remembering things with you----since I was there for most of them...do you remember that car that Bret bought for you? Heh, heh----no muffler?

You guys are the cutest things!