Maybe I am writing this post because I am having a particularly grumpy day. Mila had picture re-takes today and she said she brought home some form to fill out for them like a million years ago. Well, since I am so organized and on top of things, I went over to my ginormous stack of papers that I "need," and started to go through them. Since we were already running late to pick up a neighbor for carpool, the rummaging turned into throwing and high-class drama. Ethan went and tattled on me to Ben right as I was yelling at Mila, "Just tell the photographer your mom is crazy and has four kids and she doesn't know where to put stupid forms that come home from school! Wait...no, don't say that for reals!" It was that kind of a morning.

So, I am reminding myself today that I am a very lucky person. Not only do I have a great family and a great job (said without a hint of sarcasm, seriously), but I get to go out at night and "play" with my friends. My improv troupe, the Thrillionaires, got to perform recently at the opening Gala of the Covey Arts Center in Provo. It was a thrill (no pun intended) to perform for the Who's-Who of Provo and even get to meet some of them. Lavell Edwards came up and sort of stood next to my friend Brett with his arm on his shoulder like he just wanted to "hang." Then I met the Mayor without knowing he was the Mayor. When I did find out who he was, my friend Matt went over and asked him if he could have the key to the city, because Matt can get away with saying stuff like that. He declined the key, but promised us a pothole. Many people told us we were the highlight of the show, which included other acts such as the Utah Ballet, Utah Lyrical Opera, the Utah County Symphony, and the Wasatch Chorale. So we fit right in with that group! (What the heck were we doing there?) If you don't believe me about all this, just read what it said in the paper the next morning:

"A cultural buffet of violins, ballerinas and beautiful voices christened the theater of the new Covey Center for the Arts in downtown Provo on Thursday night — including a surprise appearance by pianist James O'Neil Miner.

The Provo Arts Council offered a sampling of coming attractions at the Grand Opening Gala, and a Utah Valley society-page audience roared with laughter at an improvisational play that lampooned center namesakes Steven R. and Sandra M. Covey, who donated $2 million.

An audience member suggested the name "Seven Habits" for the spontaneous musical by the improv group Thrillionaires, who did not disappoint.

"I want to sharpen your saw," the lovesick loser of a protagonist told his chosen after changing for the better in the wake of reading Steven Covey's "Seven Habits of Highly Effective People."

One of the biggest laughs came after the young man asked the girl to be his and she swooned, "I've been waiting for a proactive question like that my whole life."

The quartet and pianist did so well that Steven Covey stood at the end and signaled a touchdown."

I can't say enough about how much I love performing with these people. They are all as kind, generous, and loyal as they are talented and hilarious. Thanks for brightening up my crazy life, guys! OK, I'm so over the love-fest now. Back to diapers!

P.S. We are doing a Western show on October 22nd featuring Nashville band Jane Deere. On the 29th, we have our second annual Halloween show(my first, considering last year I was GREAT with childs), featuring live accompaniment by the incomparable Dave Tinney. I will be in both shows. See you there! 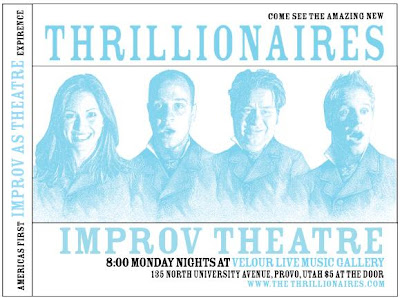 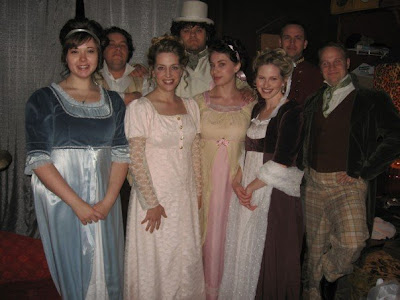 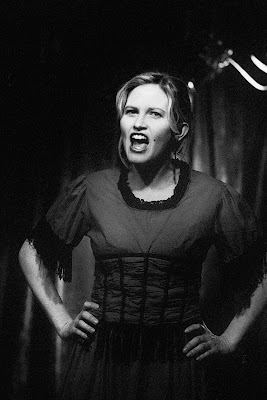 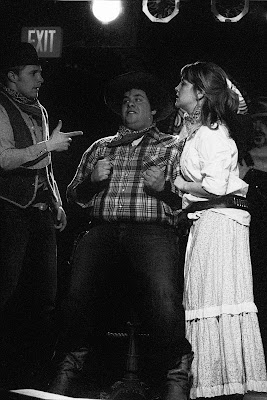 I didn't check my blog until late Tuesday night so Jenna was really disappointed that she didn't get to see Mila. Maybe next time! I'm a little envious that you have such a fun outlet/escape from motherhood! Good luck with your shows!

I feel the SAME WAY! Thanks for calling me those many months ago and asking me to come perform. It has saved my life! It has been the fun, challenging, creative outlet every mom needs. I am already going through withdrawls big time (um, 2 weeks?). . .

Hello,
I was searching for the name of a song and came across an entry wher you said: "Is it bad that I want "Soft A Blossom Falls" played and/or sung at my funeral? I just love the song-"
We sang that song in our high school A Cappella Choir back in 1965-66 and I have been trying to remember the title/author for several years.
If you recall the name of the song and who wrote it, I sure would appreciate an e-mail telling me what it is.
Thanks,
Tom Hudson
n.t.hudson@att.net

I want to come watch you and the Thrillionaires! ...Hopefully one day!
Your CA pics were fun to see too... let me know when you find a disneyland candle! I want one. You should totally suggest that to thre yankee candle people.

I wish I could come see a show. You are so delightfully famous!

I still haven't washed the shoulder LaVell groped (or was it gripped?) and laugh every time I remember that we didn't know who that guy was waiting to talk to us until you overheard someone addressing him as Mayor.