Me no speak Romanian

I am sitting in our hotel room in Bucharest. I probably woke up around 5 am and I felt like blogging. Today is Saturday, June 28. I flew out of Salt Lake on Thursday afternoon, quite unsure what to expect.

That day, when we pulled up to the airport, I felt a little sick to my stomach about saying good-bye to my kids, especially the baby ones. Luckily, both the twins were asleep so I didn’t have to endure the cutest little “bye-byes” ever heard on the planet. Ethan and Mila gave me fake sad faces, but they were pretty engrossed in Mila’s Top Secret Brazil spy game, so they weren’t really that sad. Ethan didn’t “have tears” as he had promised me he would, but that was probably a good thing after all.

I went into the airport and got through security pretty quickly, then sat there wondering why I had checked in two hours early for my international flight. We eventually boarded and were on our way to Paris. I really liked Air France. They fed us a lot, which is always good, and I loved that everything was in English and French. Even half the flight attendants were French. I watched a really dumb movie, Fool’s Gold, then slipped myself half an Ambien and passed out. I’m not really clear on what happened after that. All I know is that roughly four hours later, my land surveyor neighbor from Tucson was asking me if I wanted to borrow some eye drops, so either I was doing something embarrassing like snoring or drooling and he graciously woke me up, or else I just kind of came to on my own and I must have been blinking a lot. Either way, I was grateful for the eye drops.

When we got to Charles de Gaulle airport in Paris, I quickly found the tram to take me to the gate to make my connection to Bucharest. The problem is, I thought the gate was in the F terminal and it was actually in B. So I actually circled the entire airport once, got off at F, went up the stairs to have a man look at my ticket and say B, then went back down and circled the airport again, all the while panicking that I would miss my flight. However, amidst my panic, I enjoyed being in Paris for a moment and trying out my rusty French. I think I only said “2B,” “oui,” and “merci,” but it was awesome.

I finally made it to the right gate with a few minutes to spare and burst onto a plane full of people who looked Romanian. I took my seat next to a couple. The lady turned to me and asked something in Romanian, to which I smiled and said “I don’t…speak…Romanian” like an idiot. She gave me a dismissive gesture with her hand and turned to her husband and said something, probably “It’s just another dumb blonde American…” The flight attendant’s voice came over the intercom and said something that made everyone look at their watches and grumble, so I assumed they had said we wouldn’t be leaving yet. Even blonde Americans can figure out some things. I got an idea. I turned to my neighbor and asked, “Parlez-vous francais?” She did, and we were able to break the language barrier. I loved that five minutes before, we were a Romanian and American, just staring at each other blankly, and now we could use a third language to communicate. So cool. I told her that Ben was working for a lawyer in Bucharest and today was our ten year anniversary and we had four children, two of them twins. She told me that she had been at some conference in Paris and her husband just walked around while she was there and they had one son who was studying archeology. After that conversation, I felt like maybe we were friends until they served lunch. I couldn't bring myself to eat anything. Maybe it was the carrot-turnip-mayonnaise salad, maybe it was all of the airplane food I'd already consumed. At any rate, my neighbors devoured their lunch then looked at my untouched food suspiciously. I wanted to say, "Je n'ai pas faim--j'ai deja mange beaucoup!" But I didn't--I sat there, thinking, "Great--I haven't even gotten to the country and I've offended the people by not eating their gross airplane food."

This is what Ben told me to expect when I got to the Romanian airport: “You will exit the plane on to the tarmac and be ushered into a stinky bus. You will then pass through a passport check. If you get in the wrong line, they will yell at you. After that, go straight to the baggage claim and go right to where the baggage shoots out, so your bag doesn't get stolen. In Romania, things such as lines, politeness, and patience have not yet been invented, so push to the front. If your bag is missing, go to the second office. If you go to the first one, they will yell at you. After you file a claim, come outside and look for me. Don't go with some person holding a sign with your name on it. (Apparently, my husband also thinks I might be a dumb American blonde.)

So, here's how it actually went down: the bus wasn't really that stinky, no one yelled at me, but they did lose my luggage. And boy, was he ever right about there being no such thing as politeness. I was standing in the "line" to the lost baggage office and yet five men cut right in front of me. Not one, FIVE. MEN. Ethan would have been screaming his head off: "Ladies first, ladies first!!!"

Luckily, I was sort of planning on them losing my luggage so I was not too distraught and I had a carry-on stocked with clothes and toiletries. I was finally able to go out and see Ben and I got to listen to him call the lost and found office from outside the airport and converse with them about my bag in Romanian. It was hot (As in, I love listening to my husband speak Romanian. But it was also about 95 degrees.) Then we took off in a taxi to head for the hotel.

Romania is a fascinating place. There are all of these huge, beautiful old buildings adorned with graffiti and window air conditioning units, set amidst dilapidated streets and littered sidewalks. Ben got it right when he said that the air smells of garbage mixed with cigarette smoke. They drive like crazy people and yet wear no seat belts. The taxis don’t even have seat belts.

After checking into the Hotel Venezia, we walked to a restaurant called La Mama, which served traditional Romanian fare. I loved the meatball soup with borsch and herbs, but did not really enjoy the meat cooked in cabbage with polenta, which was the most Romanian of all dishes, according to Ben. Over dinner, Ben told me about his past month here and I especially enjoyed hearing about the boss at his firm, who always greeted Ben and his friend with “My wonderful American friends…” Apparently, he sounded exactly like the Count on Sesame Street, but with a lisp. I’m sorry I didn’t get to meet him. We walked around some of the city and I marveled some more at the gorgeous buildings that no one can afford to maintain. Ben told me the history of the Revolution of December 1989 as we stood in Revolution Square. He said there’s actually a video on Youtube of Ceausescu, the last Communist president in Romania, standing on the balcony of the CC Building in the Square, trying to pacify the starving citizens who were hissing at him. The day was supposed to be a celebration of him and he was actually shocked that the people were so angry. I just can’t believe that all of this change has occurred within this country within my lifetime. It’s crazy to be in Eastern Europe.

I will have more stories and pictures in the next post... 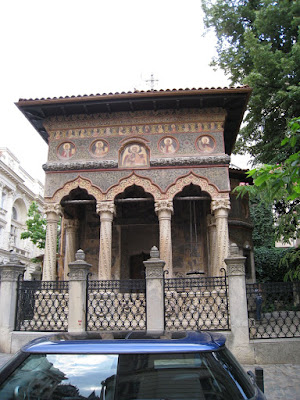 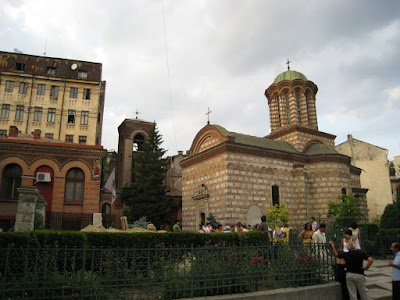 Wow! I had no idea you speak French but now your trip makes sense. Happy anniversary! Can't wait to read more about your travels.

If you could please post every day of your trip, that would make me very happy. Thanks.

This looks like a once in a lifetime opportunity. How fun to be there with Ben, who can speak the language and give you more of an "insiders view" of the culture.

I am also excited to see how you spend your time in Paris.

So glad you made it there in one piece...did they find your luggage??? Enjoy your time there!

So cool. It was fun to visit with your Mom on Sunday and your babies are absolute beauties. And you are a hero to be able to keep up with nearly two-year old twins as adorable as they are.

Great story, Hailey! I can't wait to hear more about all your adventures...
I just now got to read your blog, as I haven't had the "time" to do it before----as you well know why... :)

Your kids are adorable and amazing---and sooooo snuggly, I ache to hug them again.