This one's about the Twins

Remember when your daughter was little, and she had a cute little friend over, and they played really nicely some of the time, but most of the time they just fought over toys and screamed a lot, and you thought to yourself, "Is this play date really worth it?" and just couldn't wait for the little friend to leave so you could get back to normal? OK, well take that scenario, and imagine that the friend never leaves, and you have what it's like to have 2-year-old twin girls.

Don't get me wrong. I'm not saying that I want one of my girls to leave, or that one is more my daughter and one is the friend. They're both the daughter and they're both the friend. The point is, it's a never-ending play date from you know where. Having said that, it could be a lot worse. They could be two 2-year-old boys and spend all day playing in the dirt and mud in the empty lot next door. At least, that's what Ethan and his bestie did when they were two. Wait. Maybe that IS better. I'll get back to you on that. (Unrelated question: You know when your son and his gang of friends storm into your house and they all reek? What IS that smell and where does it come from? And should a 6-year-old start wearing deodorant?)

A lot of the time, Lane will give in and give Lucy whatever it is she wants. The problem is, Lucy wants EVERYTHING. She sees herself as the sole proprietor of everything in our entire house, and I bet she would kick all of us out, if she could. The girl shares NO thing. Just this morning, I caught her screaming about Lane being in "MY ROOM," and so I had to remind her that there were two cribs and two names hanging over the cribs. She was not happy about that, that's for sure. Lucy is grumpy a lot. I'm allowed to say that, because I'm the mom. If someone else starts calling her "Lucy the grump," we might not be friends.

Lane spends most of her day walking around the house, saying that the blue towels are "beautiful," and her breakfast is "perfect," and that I am "so pretty." She is a super-princess-diva who still refers to herself as "Honey." She will not pray, though. Lucy folds her arms right away and bows her head and everything. Lane just says, "No! I NOT pray!" and keeps on eating. Sometimes, I suspect that Lane takes things away from Lucy just to see her have a meltdown, which is super uncool.

After everyone screams long enough, and we can't come to any solution, we put on Dora, and then everyone wins. How do you think I'm writing this right now?

Also, both girls are super shy (anti-social), and get very upset when I dare to take them in public. Just last week, we went to a free hot dog party for mayoral candidate Steve Clark, and Lucy spent the entire time sitting on the grass hunched over, with her hands over her eyes. Occasionally, she would peek up at me and give me the evil eye, then go back to hiding. They don't really want to play with other kids and mostly tell them to "Go away!" Although, if you think about it, the novelty of having another person around that's your age has LONG worn off. They are so over it.

There ARE the times when they kiss and hug each other, or hold hands at the gym, or walk around the house calling for each other, and that makes up for pretty much everything. I would endure ten tantrums a day just to see one tender sisterly moment, and so it is definitely worth it.

Maybe this is all sort of a disclaimer for my family, before we have our family reunion in less than two weeks. At that time, we will have seven two and three-year-olds together in the same house, and mine are the only girls. And since I am not really big on apologizing for a child's inherent nature, I probably won't be giving them time-outs for being loud. If my child hits another child, they will get a time-out. If they rip something out of their hands, I will make them give it back. But my children have inherited the Cannon-Jones lungs, and there ain't nothing to be done about it. I guess what I'm trying to say is: bring earplugs! There WILL be screaming! The trade-off? Mila, one of the loudest toddlers in the history of time, is now quite the little belter. 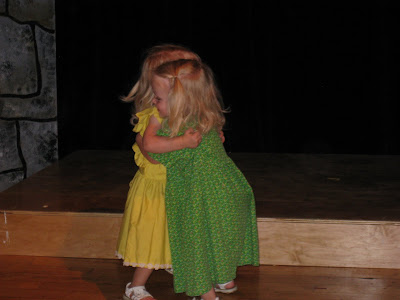 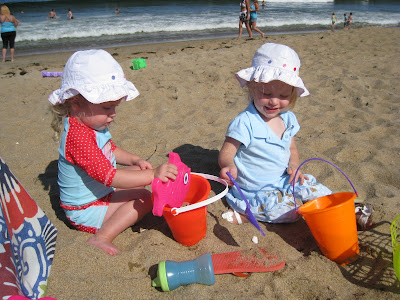 The beach in Massachusetts 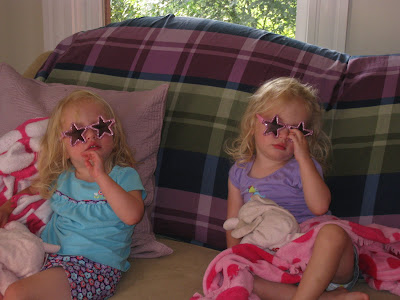 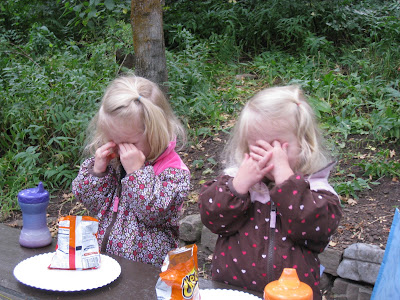 Don't you dare take our picture while we're camping!
This video of them dancing on the 4th of July shows their personalities quite well. Lucy is in white, and is very Mia Michaels with her emotional writhing from her center. Lane is more Sonya Tayeh with her arms extended and her quirky twirling. I have to apologize for my voice when it's recorded, which automatically becomes Ms. Utah Supreme. Please tell me it doesn't sound like that in real life. Please. Also, notice the reaction to the gunshot at the end.

Cuties! I love their dancing skills :) I'm exctied to see them. Oh, and Ella has the same dress as Lucy.

I consider myself warned. =)
They are just the cutest little things and I can't wait to see them! PS--I'll apoligize ahead of time for any wrong doings my boys do against your girls! =)

So cute, and while twins is gotta be hard, it's a unique club that only you and a few others really get to enjoy.....

Now THAT brings back memories. Trust me, it gets better, by degrees, until when they're about age 5 you look back and laugh when a mom of 2-year-old twins posts something like this on her blog. =)

THose girls are delicious. I think Ivy would fit well with them.

As for smelly boys... I KNOW!!!! I think this may be the reason for the traditional summer buzz cut. Oakley smells like a wet dog in the summer, and the less hair the better.

Puberty is going to be a big smelly BEAST.

I completely and totally loved the dancing twins on the 4th of July! And when I was little I went to that parade several times.

I pretty much fell in love with them when you brought them over the other night.

And I'm so with you on the boy smell thing! But it's usually when Cache is sleeping...I'll go wake him up or check on him and he is so smelly!! What is that? Sweaty head syndrome? Maybe we should look into little boys deodorant for sure...

If you're to dance A Mia Michaels Routine, please to remove your shoes.

(That was awesome, the way they ran when they heard the gun.)

Oh dear----now you have me crying again! oh, and I didn't get that picture of them hugging in my theatre!! So adorable!

Lovin' the dancing---they take after their Mimi---who was on the float passing by soon....