At our last Thrillionaires show, the theme was 80's rock and it was radical. We had an audience of 75, all ready to be taken back to the decade of John Hughes and shoulder pads. For our first play, we got the title "Back to the Top" as a suggestion. What followed was a high school drama about a stuck-up football jock who learned a valuable lesson about trust, life and love, after discovering the dark secrets of a 30 year old gold stamp collector. There was also a prom queen runner-up who fell in love with a rebel artist! (Are you crying yet that you missed it?) 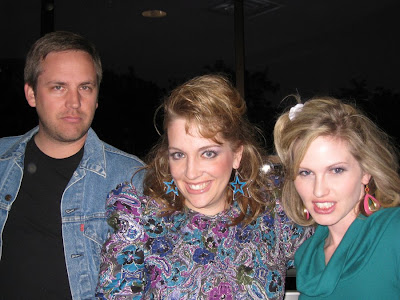 Brett, Lisa and I before the show (also before Brett had his first wig of the evening on)

For the musical half of our show, we were given the suggestion "Hot Sugar" as a band name, and we then told the story of a trio of gas station workers who realized their dreams when a music idol-turned producer (named Nigel Thorpe, aka Gold Stamp) and his assistant discovered them. Brigham played the piano, and Brady was on the electric guitar, improvising their musical hearts out. Overall, it was one of our best shows, even though my hair, huge when I first left the house, continued to shrink throughout the night. Aqua Net, anyone? 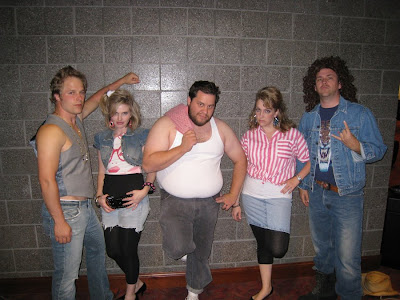 Maclain, me, Jake, Lisa, and Brett, after the musical
Posted by Hailey at 4:42 PM

You guys are soooooo hot!

I am crying that I missed it! Jacob said you were AMAZING.

You guys look too cool!

Looks fun! You guys look like the bad crowd on Saturday's Warrior... :)

That was the most fun. EVER. (better than a book club, anyway!) And when you walked out in the best 80s prom dress ever and said you made it?! Best moment ever.

You are totally invited to my next 80's party. You look smashing!

I told Jeff I want Thrillionnaires tickets for my birthday. I hope he remembers. It's the night Kirby H is joining you. I've heard amazing things about you guys!