You guys, every day I die a little...

...because my babies won't stop growing. I love these little people and why do they have to get big? They are jumping up and down in their cribs as I type this. All I hear over the baby monitor is Boing! Boing! And lots of giggles. It's their daily pre-nap ritual. 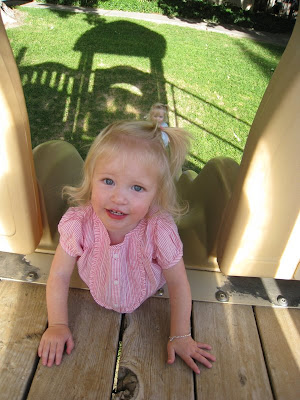 Lucy, going down the slide for the 50th time in a row 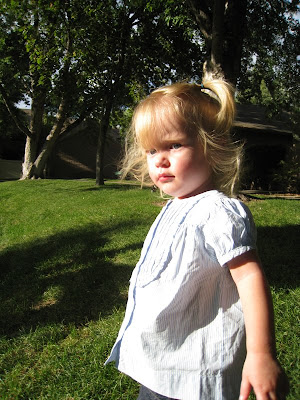 Lane
Mila had an XBox party recently and invited three boys. They all ran inside our house after taking the bus home and Mila said, "You guys! My mom put out lots of snacks that rock!" (I totally did.) She also knows everything about Pokemon and Club Penguin. Do you think the boys think she's cool? Um, yeah! She is almost finished with Harry Potter Book 5, and she understands everything that's happening, she claims. I told her that I am proud of her because she never lets her peers tell her what to do or what she likes. She replied, "It's because I'm brimming with confidence, Mom." 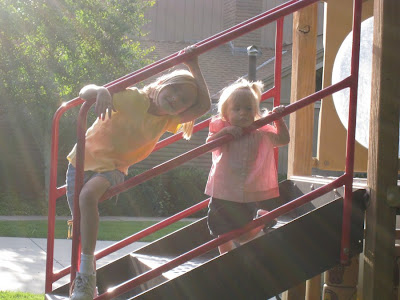 Mila and Lucy
Ethan sometimes kills me the most of all. He tells me that when he grows up and gets married, I will stay behind in the house that he grew up in, sort of like "a servant who stays in the castle, while the king goes out to find new lands..." I always thought I was his queen, but clearly, I was mistaken.

His prayers right now are awesome. He says things like, "You know what? It is really hard to be good, but we are trying our hardest to be good every day. Sometimes the babies bug me a lot, but that's OK because they're little and don't know any better so I need to respect them. Also, when people move in, you need to be nice, because once I moved in and I was afraid, so I learned to be nice to new kids. Oh yeah, and when we're helping, we're happy..." and so on. We all just sit there and wait patiently--Mila doesn't even open her eyes, bless her heart, but I open mine almost the whole time because I'm silent laughing with Ben.

I also love listening to him rant about how the only thing he hates about school is the bus ride home because "it is TOO crowded, and one day, I even had to sit on Mila's lap! Aargh! And another day, I saw a spot, but before I could grab it, Carrie was yelling, 'Sit here, sit here, sit here!' and argh! I got so confused and then I lost my spot!!" I love it. So. Much. 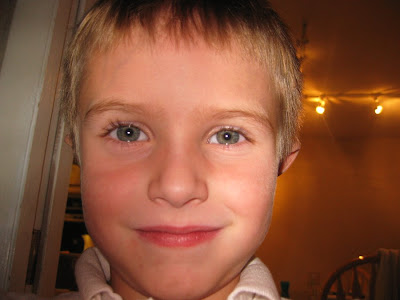 He is really into taking self-portraits with our old digital camera
I just like my kids a lot, you guys. (This is the kind of post my friend Josh was talking about.) But I will counterbalance this bragging by admitting to everyone that I am a big disorganized mess and my house will always look like it's a Monday morning. So wah wah waaaaah...
Posted by Hailey at 12:26 PM

Hailey - please don't feel bad for bragging about your kids. I like hearing about them. It gives me hope that some day Noel will say something in his prayer other than " please help us to not be monkeys. Amen." the boy will be a sunbeam in about 4months. We are so proud.

Josh--that is so cute. Are you the one calling them monkeys? Or does he actually have a fear of backwards evolution?

Did I ever tell you about the time that my cousin prayed that "Satan would have a bad day"? It is still my most favorite prayer by a little boy EVER!

Your kids are awesome! I told Jenna you might be moving close to us and she freaked! She's so excited. I love kid prayers.

Hi there, I'm here via Lisa's blog. We visited Utah over the summer and saw you in the Thrillionaires show at Sundance. (It was the rainy night. Was there more than one? I don't know.) Anyway, we had such a great time. Thank you...it looked like so much FUN. I kind of wanted to join in :)

I love this post. It's a great one for your "family history"... Your kids are great. I LOVE Ethan, I love that he has ALL SISTERS (like Oakley is going to) and is still all boy. Also, I love Mila because she is so sassy.

Which cousin was that?

I LOVE YOUR CHILDREN!! Of course, I am a bit partial, but I think that they are BRILLIANT!! They take after their Mom! (well, I guess Ben is pretty bright also...)

Thanks for the pictures----I am ACHING inside each day that I can't hold them and give them Mimi tickles.
I just keep praying that you will REALLY still move back here so that I will only be a four hour drive away! Love you....

Your kids are adorable. I think Mila is going to be the 15 yr old in the BYU classes. She is WOW.

Okay, Hailey, seriously your posts are HILARIOUS. The "brimming with confidence" made me laugh out loud. I also especially loved the whole Ethan is the handsome prince and you're the servant girl left in the castle...so so so funny! Please keep bragging about your kids because it seriously makes my night! :)

Yeah, yeah, your kids are super cute and brilliant, yada, yada, yada. (No, they really are.)

Let's talk brownies. I read over at Light Refreshments about the Blissful brownies you had, so I just bought some and sent them to Janell at Frumpin it Up, who just had a brain tumor removed.

Q #1: Are these good enough to make a girl forget she's just had brain surgery? Is a tall order, I know.

Q#2: I ordered caramel and coconut. What sort did you have?

I love having neices and nephews that make me feel like a tard :)

CUTIES! I just posted about how my kids have been completley crazy this week...now I feel bad! Your kids are completely adorable and totally bragable!!! I showed Caden their pictures and he only remembers Mila and Ethan's names...apparently the little girls were forgetable in his boy-minded world. If they don't run along with him, he doesn't remember. I however cannot believe how big they're getting! SOOOOOOOOOOOO cute!

Yes to all that AND just know that I write my blog because I make annual books out of it from Blurb.com So, really I consider it family history, and journaling since I defer to blogging instead of those things anyway. I now have three books that chronicle our lives from the start of my blog almost two and a half years ago! So Brag away!

Hailey, I LOVE this post! I can totally see why you die a little every day. Your kids are so wonderful. Tonight I had to take something to Jordan while she was babysitting. (Ethan answered the door and told her it was the church lady! Awesome!) Anyway, just in the 2 and a half minutes I was there, I was totally dying over how adorable the twins are, and how precocious Mila is, and of course Ethan slayed me with the church lady thing! To come home and read this made it ten times better. Oh, and you'll love this: Josh went through a phase where he used to SING his prayers. They were precious.

Thanks for stopping by my blog tonight. So fun to hear from you.

Your kids do look like they're getting bigger! so cute. The twins are going down slides!? Crazy. I guess I just picture them how I saw them last. (which seems like a long time ago...)